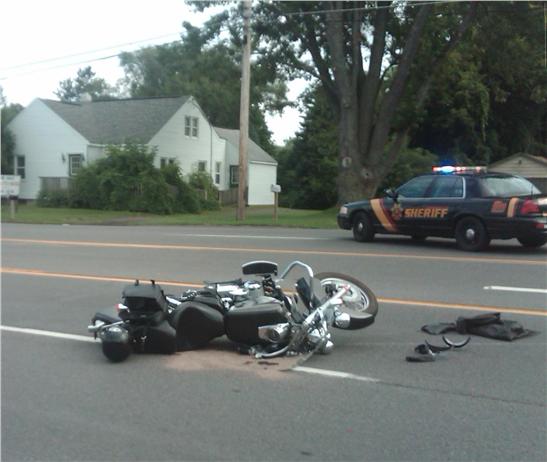 Two motorcycle accidents in two days at the same intersection are a reminder of danger motorcyclists face at many intersections.

Two accidents involving motorcyclists in two days at the same intersection are a stark reminder to all motorcyclists of the dangers we all face as spring arrives.

No matter where we are from or where we ride, we all know about “that intersection” — the one that makes us nervous.  Maybe its the way the intersection is constructed – limited sight lines due to vegetation, signage or even heavy traffic can all make an intersection dangerous.  So can the natural contour of the land, inappropriate signage or the speed limit being too high to allow motorists to react to changing circumstances at the intersection.

Judging by two collisions on consecutive days, the intersection of  State Route 49 and Whig Hill Road in West Monroe, N.Y., in Oswego County, is one of those killer intersections. Neighbors who live near the intersection told the news media that there are many accidents there.

On Sunday, motorcyclists Robert Hoke, 54, and Lisa Staple, 49, were killed instantly when the driver of a pickup truck turned left in front of their 2006 Harley-Davidson. The motorcycle struck the truck and Hoke and Staple were pronounced dead when emergency crews arrived.

Deputies said the 65-year-old pickup truck driver may have failed to yield the right of way to the motorcyclists, but the investigation continues. According to this report, alcohol was not a factor in the crash.

On Monday, a 57-year-old motorcyclist, Michael J. Bellomo, was injured and airlifted from the scene after another car-motorcycle accident at the same intersection. Lindsay Perry, 17, was making a left turn at the intersection and turned in front of Bellomo, deputies said.

Bellomo hit the rear passenger door of Perry’s car and was thrown from the motorcycle, deputies said. Bellomo was seriously injured and the young driver is expected to face charges, deputies said.

In Elmira, Corning and all over the Twin Tiers, let’s remember two things:

1. With the early spring, motorcycle season is already in full swing. We all need to REMEMBER TO RIDE LIKE WE ARE INVISIBLE. Always assume the other driver does not see you, especially when we approach drivers making left-hand turns in front of us!

2. Beware of all intersections you know are dangerous! As I said before, we all know a couple that we just avoid because of poor signage or poor visibility or whatever, so we need to be doubly careful and avoid them if we can and be doubly cautious if we can’t!

Remember what happened the last two days in Oswego County, and beware of Motion Camouflage, which may have contributed to these collisions.