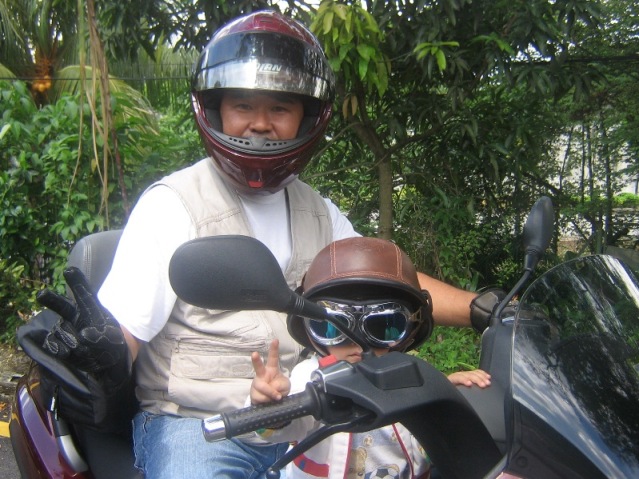 When is it safe for a motorcyclist to have a child passenger?

A Tampa, Fla., motorcyclist was charged recently with a felony count of Child Neglect for holding his 3-year-old son on his lap while taking him for a spin.

It is important to note that New York State does not have an age restriction on motorcycle passengers, according to the DMV. But parents have to use common sense. Here is a rule to live by: if a child can’t sit on a seat designated for a passenger and reach the foot pegs, then they shouldn’t be on the bike because they can’t hold on if there is a crash — and neither can you if you are trying to hold on to your child!

Tampa Bay Online reports that  Jose Nelson Diana, 33, was driving his motorcycle from 20 to 30 mph with his son on his lap when he was stopped by police. The son was not restrained in any way, police said. Diana was released from jail after posting $7,500 bail.

Kimberly Morgan, a writer for Yahoo!, says the case has stirred controversy and restarted the debate nationally about the use of helmets and passenger age limits.

Morgan points to Florida as an example: The state mandates that children under 5 years old in a motor vehicle must be in a child restraint device. Children 3 and younger must be in a separate carrier or a vehicle manufacturer’s child seat. BUT the definition of “motor vehicle” does not include motorcycles.

For riders in Elmira, Corning and the Twin Tiers: New York State has a law similar to Florida’s!

Check out the laws across the country regarding motorcycle helmets and children, according to the Insurance Institute for Highway Safety.

Let’s remember the key to motorcycle safety and children — use common sense, and if they can’t touch the pegs, they can’t ride! And they ALWAYS wear helmets!