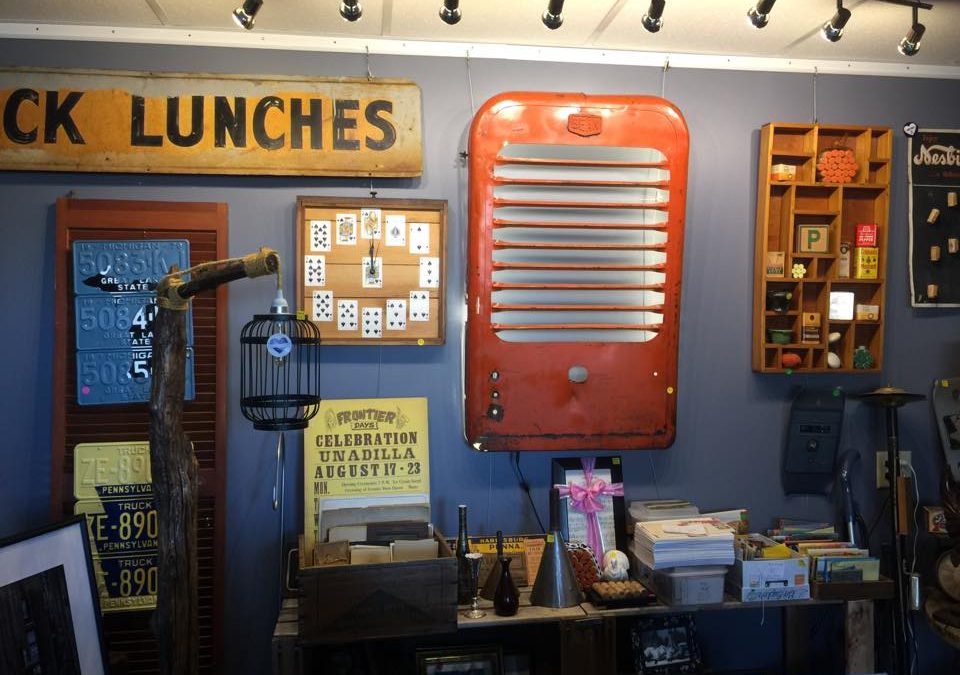 A shorter version of this interview with Nutmeg Upcycling owner Rich LaVere appeared recently in the printed Summer 2018 Ziff Law Firm newsletter. Here is the full interview with the longtime downtown Elmira business owner and advocate: 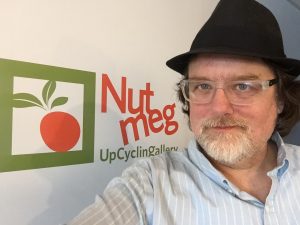 Rich is the owner of Nutmeg Upcycling, a small shop that sells “upcycled” originals near the entrance of the Mark Twain Hotel, a few steps from the intersection of West Gray and North Main streets.

His shop opened in October 2016, and started taking off enough in 2017 so he decided, after some soul-searching in late 2017, to keep going in 2018. He’s on Facebook and Etsy, where he has sold some smaller shippable items to folks all over the world.

Rich takes other people’s cast-offs and “upcycles” some items into one-of-a-kind gems.

Rich is the former owner of LaVere Media, which used to be right around the corner in the front of the Midtown Building. He closed it a few years ago, but he’s happy to be downtown again and is always one of its biggest advocates.

We spoke with Rich recently in his cozy shop that has a great view from his shop windows of Wisner Park, Langdon Plaza, and up North Main Street toward Park Place and St. Patrick’s Church.

Question: What sort of items will people find in your shop?

Rich: We take items found at auctions and sales and “upcycle” some of them. We clean them up and sometimes make them something new. It’s a lot of fun to be creative and upcycle.

For example, I have made an end table from reclaimed lumber. I transformed an old tractor grill into a lamp and a drum into a stained glass lamp. We have old postcards, books, and hundreds of miscellaneous items found at sales.

I am also selling some of my original photography and I have my son Andrew’s original artwork, mostly in pencil and charcoal.

Q: What has been the reaction of customers?

Rich: People who come in here to a person love this place. I get lots of compliments and good vibes, a lot of positive feedback, and some great suggestions. Andrew does pencil and charcoal drawings of people, places, whatever interests him. His art sales are doing exceptionally well. We are very happy because a big part of my goal in opening the shop was to give Andrew an outlet to sell his art. He is here at least once a week, drawing. That’s been real positive.

I am also happy to say I have really enjoyed the last two years of meeting new people, so the positives very much outweigh the negatives.

Q: How were your first two years?

Rich: We hit the ground running because of when we started. We started right at the beginning of the holiday season, on Nov. 1, 2016. November and December were fantastic, and then we found out in early 2017 how much of a seasonal business this is going to be.

We’re still discovering what the ups and downs are after two years, but the gallery is holding its own. It has covered its expenses with a little extra and I am happy with that right now.

Q: How did you come up with the name, Nutmeg Upcycling?

Rich: We have a dog named Nutmeg and Andrew loves the dog, so when we talked about picking a name, Andrew’s face lit up and he said, “That’s our name!”

Q: Why did you return to downtown Elmira?

Rich: I think there are places where we could do better, but I am kind-of an eat-my-own-dog-food kind of person. I live in Elmira, I am a member of the Chemung County Chamber of Commerce, and I believe in the future of the city.

I am not trying to be anyone’s hero. I realize it’s a 300-square-foot shop and we are a tiny sliver of what is going on down here, but I really do want to see this city succeed and I hate to not be a part of it or not at least give it an honest effort.

Q: Why did you select the new location?

Rich: I had no plans to open a retail space or a gallery. My plan was to do this business through Etsy and other online sites like Facebook. I had zero plans to open a retail space but I was downtown one day and I walked by and I looked at this space and I thought, “That’s big enough to be able to maybe carry some items that I am not able to sell online because of the size and the prohibitive costs of shipping.” The price was right, so I took the leap and wound up back downtown against all of my better judgment. I said I would never do it again, but it was the right thing to do. So far it has worked out well.

Facebook has been a big driver for the business. We get more responses from the Facebook app than just about anything. It really connects us with our customers. I cannot tell you the number of times someone has come into the shop after saying they saw something on Facebook. I really try to keep up on Facebook. Fortunately, out of town people stumble on us there, too.

I also get browsers before or after they eat lunch or dinner at Beijing Gardens. I didn’t anticipate that it would attract people here.

Q: Why did you close LaVere Media?

Rich: The photography business was changing and the studio model was not working anymore. The idea of people gathering their family and coming to a studio to have a photo taken is a business model that doesn’t work anymore, at least not in my mind.

When we moved into the Midtown building on North Main Street, within a few weeks, Olan Mills, Sears, and Walmart all closed their in-house portrait studios the same week. I think the writing was on the wall that people didn’t do that anymore.

So we really didn’t need the office space and there was a lot of competition in the photo space. We were bleeding money. It was too much space to support the business I had and it was time to move on and do something else. I still do photography and videography on a freelance basis.

I found that the best way to increase your business is to go out of business. As soon as I said I was closing the business, people came out of the woodwork wanting stuff done.

I still do lots of film and VHS to DVD transfers. I think I will be doing that until I am on my deathbed. Every time I think I have hit the bottom of the barrel with old 8 mm films, someone else comes along with another batch. That is still an important part of the business.

Q: What are some of the biggest challenges you face being downtown?

Rich: My hope is that if we find our audience that the sales will follow. The biggest challenge here is finding our audience. People get the concept as soon as they walk in. The challenge is to find an audience in a downtown where people are not walking around town looking for a place to shop. They come down here, do what they have to do, and go back home. This is not a place to wander because there are not enough shops for people to wander in.

There is not a person that comes in here that doesn’t complain about parking. On the other hand, you never have to really walk more than a block to get here if you can’t park right out front. The meters are a problem for people because they don’t understand how they work. They are often broken, they read about the fines going up, and they complain about all of that. I keep a box of quarters here because no one ever has change for the meter. The meters are such a lightning rod for criticism.

Q: You are a longtime business owner and city homeowner. What can the city do to turn around its image?

Rich: The city has a major image problem. I think Elmira is very safe. I am down here at all hours of the day and night and I live in Elmira, but my customers are telling me they are afraid to come to Elmira because they fear getting shot. It’s the most ridiculous thing.

I had someone come here from Corning one summer day when the Wisner Market was in session. He walked in and said he couldn’t believe how beautiful it is down here. He had no idea how nice it is in the park.

I asked him, what did you expect? I know what they expect.

We can recognize the challenges the city faces but we don’t need to dwell on them. We need to dwell on the opportunities. I couldn’t afford to open a shop like this in Corning, but I can be a much bigger fish in a small downtown like Elmira’s. There is a lot of opportunity here if you know how to take advantage of it.

People need to get together. There needs to be some creative thinking that isn’t wrapped up in how we manage out revenue shortfall. If you’re spending three City Council meetings discussing whether to raise fees in parking meters, that’s not what you should be discussing.

What you should be discussing is finding some creative ways to fill these old buildings.

The one comment I get from people more than any other is that Elmira needs more shops like this. I agree. Let’s make it happen.