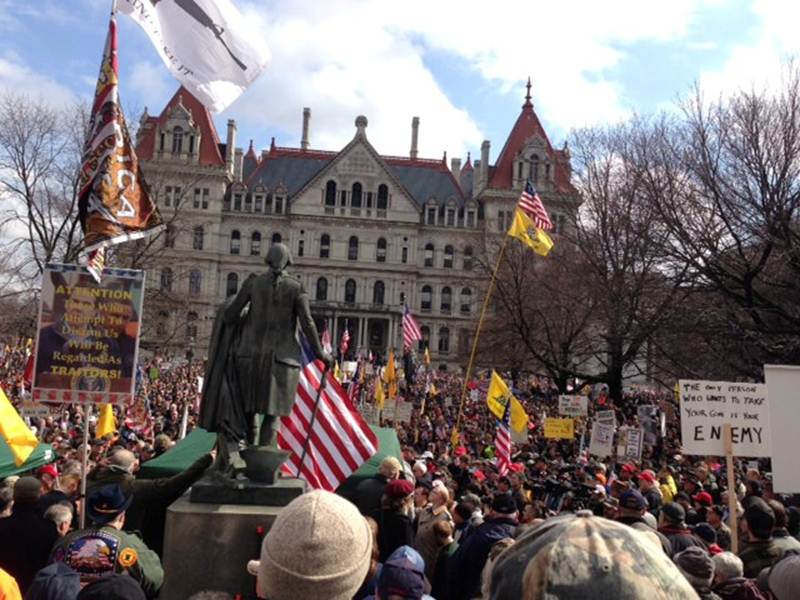 Thousands of gun-rights supporters rallied in Albany Thursday, calling for the repeal of New York State’s tough new gun-control law, one day after a state Supreme Court justice issued an order requiring the state to show good cause that the law is constitutional.

Protesters came to Albany in about 100 buses from all over the state for the noon protest outside the Capitol.

The new law bans so called “assault weapons” and limits magazine sizes to seven bullets – despite the fact that seven round magazines aren’t made for most semi-automatic weapons.

Before you read much more, here is some background: I have written about the good and bad in the new gun law here, and you can read about the new law here, including an FAQ here, on the governor’s website.

At Thursday’s rally, state Sen. James Seward, R-Milford, was among the state lawmakers who added their voices to the protesters’, calling for the repeal of the law. He acknowledged, however, that that is unlikely and said he hopes an expected lawsuit that will challenge it will get the law tossed.

“I think the court challenge is the best opportunity to make some changes in the bill, to make it more reasonable and workable in terms of law-abiding gun owners in New York,” Seward said.

Thursday’s rally was the third (and largest!) by gun-rights supporters since the law was adopted. State Police estimated that 5,000 people were there.

The governor has defended the law, arguing it will protect New Yorkers from gun violence. The law includes harsher punishments for illegal gun use and provisions to keep guns out of the hands of people with mental illnesses.

But Dave Coolbaugh, a 54-year-old from Elmira, told Gannett News Service state leaders are taking away New Yorkers’ gun rights to forward their own political agenda. “I don’t know what they think gives them that right,” he said.

Marchione’s bill, which faces an uncertain future in the Senate and Assembly, calls for the repeal of the provisions related to the expanded ban and ammunition restrictions. You can read Marchione’s bill here.

Residents of Elmira, Corning and the Twin Tiers, did you travel to the rally Thursday? Whether you went to Albany or not, please share your thoughts on this important issue in the comments below.