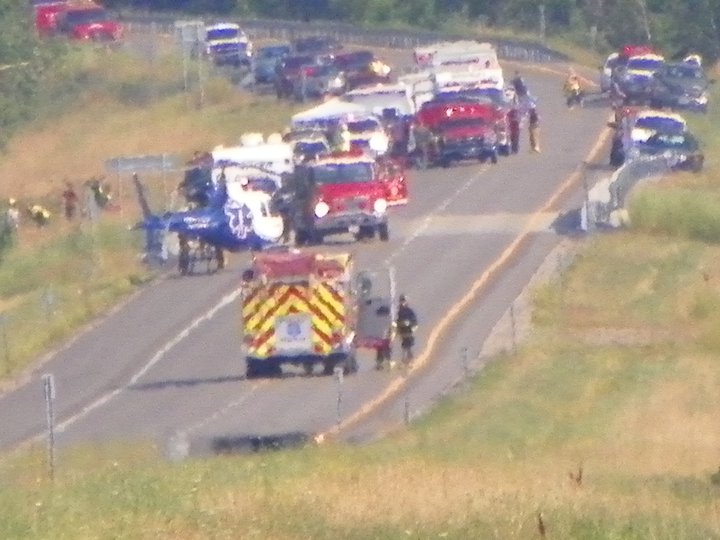 A front tire blowout appears to have triggered a tragic tour bus crash Sunday in northern Steuben County that left two dead and injured about 35 people.

Our thoughts and prayers are with the families of all the passengers.

Authorities said at a news conference Monday that the tour bus, which was traveling from Washington, D.C., to Niagara Falls, was traveling north on Interstate 390 near Avoca at about 4:15 p.m. Sunday when it veered off the highway and down an embankment about 55 miles south of Rochester.

The bus was carrying Indian nationals, according to The Associated Press report from Monday’s news conference. The bus was owned by Bedore Tours of the Buffalo area.

One of the dead was identified as Sakina Kiazar, 51. The name of the other, a 66-year-old woman, was not released pending notification of family. Twenty other passengers remained hospitalized Monday.

Dan Ronan of the American Bus Association, speaking for its member Bedore, told the AP that the driver called the owner of Bedore after the crash.

“The driver does not know what happened,” Ronan told the AP. “He was going along and the tire blew and he lost control.”

The investigation into the cause continues, state police said.

Ronan told the AP that a federal inspection report completed in February 2010 gave Bedore a satisfactory rating, the top of three grades.

The front tires on the bus were replaced a few months ago, Ronan said.

Investigators plan to interview the driver and passengers and inspect the vehicle to determine if there were any mechanical problems, the AP said.

So far this year, 32 people has died and 323 have been hurt in 17 tour bus accidents, according to Advocates for Highway and Auto Safety. The AP said 30 people were killed and 272 were injured in 28 crashes in 2010.

Check out the news report from YNN, too.

While the investigation continues, one has to wonder if anything could have done to prevent this crash.  The exact age of the tire that blew, its date of manufacture, its inspection and maintenance history, the number of miles driven on it, and its recommended usable life are all things that should be considered in determining what happened.   Forensic examination may also be required to determine whether the bus struck a foreign object, or if a manufacturing defect contributed to the failure.

The State Police will also be looking into the history of the Bedore Tours to determine their history of compliance of with federal and state mandates, as well as their mechanical maintenance and record keeping regarding their buses.  At this point, we can only hope the State Police find out what really happened, as a properly maintained and inflated tire under normal usage and in good condition is not expected to suffer a blow out.  The State Police will also be looking into the speed of the bus at the time of the crash, and whether that played a role in the driver losing control.