Lucky To Be Alive, Texting Driver Has Unforgettable Message For Distracted Drivers 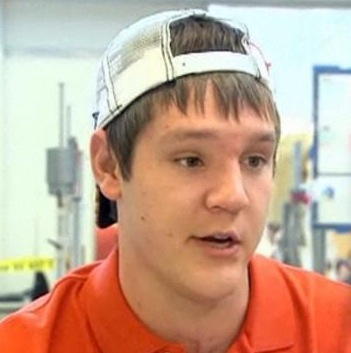 Chance Bothe was nearly killed six months ago when he crashed as he was texting while driving.

If you are a driver who is still texting or talking on a cell phone while driving, let me introduce you to 21-year-old Chance Bothe.

Six months ago, Chance was driving and texting on a Texas road when he sensed he was in danger and wrote this:

“I need to quit texting, because I could die in a car accident.”

That was the last text message Chance sent before his truck veered off a bridge and landed in a ravine.

It was a miracle that Chance survived. He suffered traumatic brain injuries and broke virtually every bone in his body. He was rehabilitating in a Houston hospital for the last six months and recently went home.

But first, he had a message for drivers everywhere:

“Don’t do it. It’s not worth losing your life. I went to my grandmother’s funeral not long ago, and I kept thinking, it kept jumping into my head, I’m surprised that’s not me up in that casket. I came very close to that, to being gone forever.”

You can read more about Chance’s second chance at life and his powerful message in The Daily News and the Huffington Post.

One of Chance’s doctors, Dr. Jacob Joseph, told The Daily News that he is seeing an increased number of patients injured because of texting on the road.

“And, unfortunately, I don’t think we’re going to see a decrease in that anytime soon,” Dr. Joseph said.

Chance’s father says his son is 80 percent back. No one knows whether Chance will ever be 100 percent again.

But Bothe told The Daily News he hopes to return to college. Until then, Chance is trying to get the word out about the dangers that come from texting and driving.

He is living proof of what can happen when drivers aren’t paying attention. He was fortunate he did not kill himself or ANYONE ELSE.

Chance hopes his story reaches some of the millions of motorists who drive distracted, and I hope it resonates with the many distracted drivers in Elmira, Corning and the Twin Tiers!

Chance believes God spared him so he can do something special. “I believe what is special is that I should tell everyone not to text message and drive,” Chance said.

Did you get the message yet?

Thanks for reading, and focusing on the road!