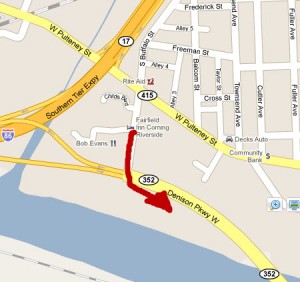 There is nothing worse than a fatal accident that might have been prevented…..

Due to prior accidents and many close calls, it has been well-known to local transportation officials that the signage off of S. Buffalo Street at its intersection with Route 352 in Riverside, NY, is totally inadequate to keep drivers from making the simple mistake of turning left on to Route 352 so they are headed THE WRONG WAY down a highway.

Highway designers know that good signage saves lives and bad signage takes lives.  That’s why highway designers are supposed to design our roads and road signs in a way that gives a driver clear visual guidance on where they should be driving.  Such guidance include directional lines on the road, Wrong Way signs, etc.  However, many locals complain that the Buffalo Street/Rt 352 intersection is just an accident waiting to happen because the intersection is very confusing and drivers do not receive the kind of visual guidance they need to safely navigate this intersection.

Sadly, these complaints about the intersection have gone unheeded and now a fatal accident has occurred…..

As reported in the Corning Leader (full story pasted below) ,  a 75 year old woman was killed when she mistakenly took a left hand turn heading EAST on to the WEST bound lane of Rt 352.

Now don’t get me wrong…..I understand this woman made a mistake and was going the wrong way on a highway. But what makes this mistake understandable, and more importantly, what might have made this mistake totally avoidable, was the fact that this intersection is so poorly designed and equipped with inadequate signage, that it was totally foreseeable that someone might go down the highway the wrong way.  And that’s why the repairs to the intersection should have occurred well before more blood was spilled….

My heart goes out to the families of both drivers.  In my opinion as a lawyer handling NY car accident cases for 25 years, BOTH drivers have a very good basis for a lawsuit claiming that their injuries should NOT have occurred.

Corning, NY– A 75-year-old woman was killed in a wrong-way crash Tuesday morning on State Route 352 in the City of Corning.

The woman’s identity was being withheld Tuesday night, pending notification of family.

According to Corning Police Department Lt. Jeff Spaulding, the woman was driving her 1999 Ford Escort eastbound in the westbound passing lane of State Route 352. She apparently turned left into the wrong lanes of State Route 352 from Buffalo Street in Riverside.

The woman traveled more than a mile in the wrong direction before driving around a bend and striking a 1994 Oldsmobile, driven by an unidentified 20-year-old woman.

The accident, which occurred approximately 100 yards east of the Patterson Bridge, was reported shortly after 11 a.m. Tuesday.

Both women were airlifted to Robert Packer Hospital in Sayre, Pa. The 75-year-old woman was pronounced dead at the hospital.

The 20-year-old woman suffered serious injuries but was expected to survive, Spaulding said his department was told by hospital officials.

There were no passengers in either vehicle, Spaulding said.

The investigation was ongoing. It wasn’t immediately clear how fast the drivers were traveling.