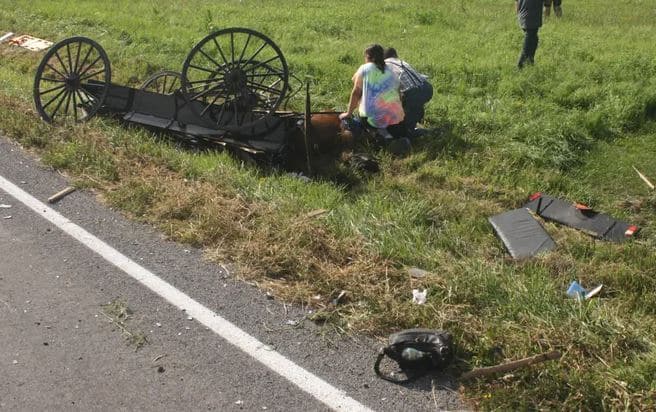 A 24 year old Penn Yan man, Justin Niver, is facing just Vehicle and Traffic tickets for causing a crash Sunday evening with a horse-and-buggy in Yates County that seriously injured seven members of a Mennonite family, including an infant and a 7-year-old boy. The horse was euthanized.  Niver was driving west on East Sherman Hollow Road when he tried to pass the horse-and-buggy at the crest of a hill and veered to miss an approaching vehicle, hitting the horse-and-buggy.

Sadly, this whole tragedy could have been easily avoided had the driver simply slowed down and waited a few extra seconds for a safe opportunity to pass the buggy.  Like many crashes, a driver in a hurry can wreak tremendous damage.

Remember folks:  slow down and be extra cautious whenever you encounter other road users– bicyclists, horse buggies, walkers/runners, farm equipment– a few seconds out of your day may save lives!

Our thoughts are with the Sensenig family as they recover from this tragic crash.  Because the Mennonites do not believe in suing under any circumstances, this clearly negligent driver will likely face no civil consequences.

Sadly, the possible criminal consequences will likely be very minimal for the driver.  Just a few traffic tickets.  Sure seems like lame punishment for nearly killing an entire family……

Niver has been issued traffic tickets for Following Too Closely, Failing to Exercise Due Care to Avoid Collision with a Horse, and Failure to Wear a Seatbelt, according to Yates County Sheriff Ron Spike.

The family will face at least hundreds of thousands of dollars of medical bills.  Each of the four helicopter flights used to transport family members will cost $30,000 or more and one can only imagine the medical costs associated with the care for this large family.

Spike said Niver was driving about 52 mph and the horse-and-buggy was moving at about 5 mph.

The buggy was being driven by 33-year-old Mathew Sensenig, of Penn Yan. Sensenig and six family members were all ejected into a field and ditch and suffered serious injuries.

Police said multiple helicopters arrived at the scene. Guthrie and LifeNet each transported one victim and Mercy Flight made two transports.

Sensenig and his wife suffered head injuries. Their 7-year-old son was in critical condition and their 7-month-old baby has internal injuries, police said Sunday night. Three other young boys in the family were also injured.

By Monday morning, all seven members of the family were in stable condition after medical treatment.

The horse was also seriously injured and was euthanized at the scene.

Niver was not injured.