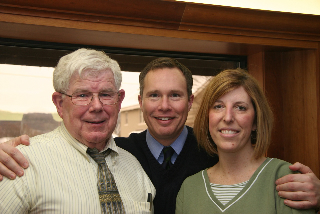 Curiosity and a need to be challenged – those are the qualities Jack Schamel says have led him around some interesting corners in life.

He has been a Marine, a teacher, a town justice, and a labor negotiator – to name just a few of his careers. Since 2002, Jack has been the Workers’ Compensation go-to guy at the Ziff Law Firm. In 2007, attorney Eric Johnson began working with Jack in the firm’s Workers’ Compensation and Social Security Disability group. They were a team, ensuring that injured workers in New York and Pennsylvania received fair treatment.

Now Jack is ready for new challenges. He retired Feb. 1st from the firm, handing over the helm of the Workers’ Comp and SSD group to Eric.

The opportunity and the ability

The staff at the Ziff Law Firm, the people he fought for, and the actual battles in Workers’ Compensation court – those are the three things Jack Schamel says he’ll miss most about his work with the firm.

“I also have a strong belief that we should help people when we have the opportunity or the ability,” he says.

Jack has spent much of his life making a difference in the Twin Tiers. He came out of the Marine Corps in 1958 and went to Mansfield University (two years ago he was inducted into the Hall of Fame there.) He worked his way through college, then started teaching and coaching at Southside High School in Elmira in 1962.

He was vice president of the teachers’ union, served on the Waverly School Board, had a scuba-diving on the side and in 1971 was national sales manager for a company from California.

“In late ‘71 what became NEA-NY hired their first UniServe directors. I was the first in New York State,” Jack says. “I worked in Elmira until I retired in 2001.” (Note – that was his first retirement!)

Jack did a lot of labor consulting on the side when he worked with the union. Jim Reed, Managing Partner of the Ziff Law Firm, suggested that Jack train to try Workers’ Compensation cases.

“He said check it out and I found out that if you pass a test and orientation you can get licensed to do comp either for carriers or injured workers,” Jack says. “I took the test for injured workers and passed.
“The test is a b—–!”

In this retirement, Jack says he’ll still do some investigation work for the firm. He’s held a private investigator’s license for about 20 years.

More causes that will keep him busy include “Union stuff on the side, working for the Democrats and whatever looks interesting,” Jack says. “Since about 1991 I have been doing arbitrations around the country for the National Staff Organization. It’s pro-bono work, but I really enjoy it,” he says. “Right now I have cases in six states.”

Jack adds, “I also have 13 grandchildren, so that will also take some time, too.”

Learning from a tenacious, patient advocate

“Virtually everything of value I know, I learned from Jack,” Eric says. “There are a couple of things that stick out: tenacity and patience. Jack was a tenacious advocate who would go to any length for the client and he was an incredibly patient man who wouldn’t jump to any conclusions, but allow the facts to develop.”

Like Jack, Eric has taken a few detours in his career path.

His undergraduate degree (1998, East Carolina University) was in nursing, and he worked as a registered nurse in a number of practice areas, including North Carolina, Pennsylvania, California, and Hawaii.

Yes, Hawaii. Eric’s an avid surfer who took travel nursing assignments where the waves were.

Eric earned a law degree from Penn State’s Dickinson School of Law in 2002 and was licensed in North Carolina the same year. When he decided to practice law, he worked in the areas of bankruptcy and housing law with a public interest law firm in North Carolina.

Eric maintained a friendship with law school classmate Matt Hughson, bankruptcy and real estate attorney with the Ziff Law Firm, and that’s how this surfer/nurse/lawyer found his way to Elmira.

Three things he’s found to truly appreciate about his new home are the seasons, the availability of a wide range of outdoor activities, and the people.

“There are a lot of fun things to do in this area of upstate New York – and friendly people to do them with,” Eric says. “You can ski, hike, swim, take a beautiful drive or any number of things.”

Eric was licensed to practice law in New York in September 2008. His years of nursing experience make him ideally suited to the practice areas of Workers’ Compensation and Social Security Disability.

“What’s rewarding about my practice areas is the ability to help folks who had a work injury get back on their feet and get back to work,” he says. “For those who can’t return to work, I can help them secure an income so they can eat and have a roof over their heads.”