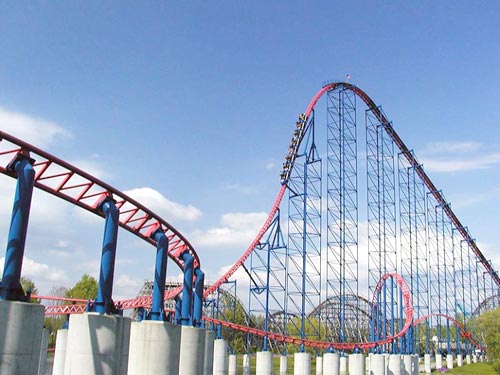 An Iraq War veteran who lost his legs died last week in a fall from the Ride of Steel roller coaster at Darien Lake.

The death last week on a Darien Lake roller coaster of a U.S. Army veteran who lost both legs in Iraq is a horrible tragedy. Our thoughts and prayers are with his family members.

But now it’s clearly time for the park operators to review their safety regulations. A double leg amputee should not be on any roller coaster unless a safe ride is assured!

People without both legs are barred from at least two coasters at Darien Lake Theme Park Resort, the Motocoaster and the Predator, according to The Associated Press.

But rules on the resort’s website for the 208-foot-tall Ride of Steel – which James Thomas Hackemer, 29, was riding when he fell to his death Friday evening – only say that guests must be at least 54 inches tall. But it adds that people with “certain body proportions” may not be able to ride, the AP reported.

Hackemer had recently returned to his parents’ home in Gowanda, near Buffalo, after years in and out of rehabilitation hospitals. Hackemer lost his legs in a roadside bombing in March 2008 in Iraq.

Hackemer was not wearing his prosthetic legs when he got on the roller coaster, his family told The Buffalo News. Hackemer, who was divorced, had two daughters, 4 and 3. They were at the park with other family members Friday evening.

Hackemer had not been at the park since before he lost his legs in Iraq, the News reported. Family members said Ride of Steel was his favorite roller coaster and they said Hackemer was “very strong-willed” and likely would’ve argued to get on the roller coaster if denied.

“I have no doubt in my mind that he died happy,” Jody Hackemer, a sister, told the News. “He was doing what he wanted to do, and that’s the important thing.”

Other veterans said they could relate.

“Doing what he did, I completely understand that,” Jack O’Connor, a Vietnam veteran, told the AP. “He wanted to go on the roller coaster. He wanted to be normal again, like everyone else, and not be thinking about some of the things that probably happened to him overseas.”

The family does not believe the Genesee County theme park did anything wrong in letting Hackemer on the ride, Jody Hackemer added.

“We in no shape or form hold Darien Lake accountable,” she told the News. “They weren’t negligent. It’s nobody’s fault. It was an accident. James thought it wasn’t an issue.”

Amusement park industry consultant Dennis Speigel told the AP that two things should be considered when determining whether someone should be allowed on a ride.

“One is rider responsibility and then there is operator responsibility, and those two issues have to homogenize,” Speigel said Sunday. “This just seems to me that it was a bad decision on both parts.”

I respectfully disagree with the family, as I am sure anyone who has been on this ride will.  This roller coaster is all about speed.  After the first drop the coaster attains speeds in excess of 70 mph.  The car then goes over another, smaller hill.  At those speeds, as the car drops, centrifugal force pulls you up and out of your seat.  The same thing occurs on all the remaining hills.  A bar pushes down over your hips, and is supposed to hold you in place.  For people with two legs it is sufficient to do its job, although it still gives the sensation that one could be lifted right out of the car.  This roller coaster was not designed for, and is obviously not safe for, a double amputee.

Attendants for this ride never should have allowed Mr. Hackemer to get on.  I understand the sentiment of the family, that he died doing what he loved and likely would have argued with the attendants if they told him no, but that is not the test of what is right and wrong.

Darien Lake has an obligation to protect people from dangerous situations.  They are in a better position to know whether a ride is safe for a particular person than that person.  In this case, they were clearly in a better position to know whether the ride was safe for Mr. Hackemer than Mr. Hackemer was, and were obligated to prevent him from getting on this ride.  They failed miserably in that obligation.