If you think your private Facebook account and its personal photos will never be exposed publicly, think again.

The top court in New York State recently ruled that parts of Facebook users’ private profiles are fair game to opponents in a lawsuit and can’t be shielded by privacy settings.

According to news reports, the Court of Appeals case in question involved a woman’s serious fall from a horse in a Long Island park in 2011. Kelly Forman sued the horse’s owner, claiming a strap attaching the stirrup to the saddle broke, leading her to fall. She said she suffered traumatic brain damage that has caused memory loss and difficulty communicating, among other problems.

Attorneys for Mark Henkin, the horse’s owner, wanted access to Forman’s Facebook account, saying they needed that to evaluate her credibility and injuries. A trial court granted access to private sections of her Facebook account, but an Appellate Division decision said Forman only had to show photos and messages she planned to reveal at her trial.

The Court of Appeals decision basically said Forman can’t decide what Facebook information can be revealed in her trial.

The case returns to the trial court now, where the horse owner’s attorneys can pursue Forman’s Facebook information.

The Court of Appeals, in the 7-0 opinion, compared social media material like Facebook photos to information kept in a file cabinet and said it should be available in a lawsuit if relevant. 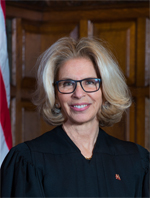 Chief Judge Janet DiFiore compared Facebook information and medical records in writing for the court. If a patient commences a lawsuit, the patient may have to release private files if they pertain to the lawsuit, she wrote.

For example, if a person brings a lawsuit, the other side – the insurance company and their lawyers – often ask the person suing to see their Facebook postings, including photos. In some cases, they want to see why you are not able to do something now that you were able to do before.

With the new ruling, the courts are not going to automatically allow access beyond a privacy setting. Trial judges will decide on a case-by-case basis if it’s appropriate for a defendant and their insurance company to see what was posted privately.

There is a very good reason for that decision: what the court is saying is just because you label something as “private” doesn’t necessarily mean that information is not relevant for the other side to be able to see. People often have to disclose private information in a lawsuit because the courts consider it relevant.

Here is the bottom line to remember from this case: there is no such thing as 100 percent privacy once you post something online.