Asleep at the Wheel, Deputy Causes Deaths of California Bicyclists 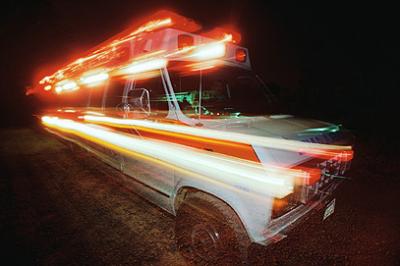 Two point three million dollars. That’s the settlement amount recently reached for one victim’s family in the aftermath of a shocking bicycle accident in California.

On March 9, 2008, sheriff’s deputy James “Tommy” Council says he fell asleep at the wheel of his patrol car while driving in the Cupertino foothills of Santa Clara County. His patrol car struck a group of bicyclists out on a practice ride. Two cyclists died, and another was seriously injured. Now, more than a year later, Santa Clara county has agreed to pay the parents of killed bicyclist 29-year-old Matt Peterson a $2.3 million dollar settlement.

“Santa Clara County settles suit in cyclist’s death after crash with sheriff’s deputy” (Tracey Kaplan, 6/30) relates how the county immediately took responsibility for the accident. Not that they had much choice. It would have come out eventually that Council was convicted in 2001 for involvement in a speed contest in Los Angeles county. He’s pleaded guilty to two misdemeanor counts of vehicular manslaughter and been sentenced to community service and house arrest.

I’m a member of the Multi-Million Dollar Advocates Forum. I’ve managed to bring in multi-million dollar settlements for personal injury and medical malpractice lawsuits in New York and Pennsylvania. Yet I know that that $2.3 million dollars is not going to compensate that couple for the loss of their son. It’s a real acknowledgement of responsibility, however, from Santa Clara County.

As an avid bicyclist, I love to take to the roads here in the Finger Lakes and in other beautiful places whenever I get the chance. There are safe ways to ride, precautions to take – I take them because wearing a helmet, minding the rules of the road are small efforts in return for the reward of well-being.

The story of this accident is so tragic because it came out of the blue. A sleeping deputy in a patrol car is not something a bicyclist can expect, something you can plan for.