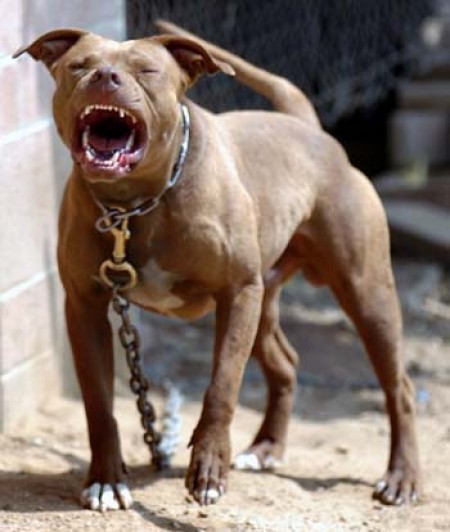 Should New York State follow Maryland’s lead and crack down on pit bulls and their owners?

Another state has cracked down on pit bulls. Should New York State do the same?

A new ruling by the Maryland Court of Appeals declares pit bulls as a breed are “inherently dangerous,” and the owner of a pit bull or one that has been cross bred that attacks a person or another animal is liable for damages. In addition, any landlord who rents to a pit bull owner is liable as well.

In New York State, the courts have said the exact opposite — there are no inherently dangerous breeds.  Should there be, though?  A disproportionate number of our dog bite cases involve pit bulls, but I have also handled dog bites involving one of the most docile of breeds – a golden retriever!

Pit Bulls make good scape goats.  Just check news across the country on any given day and you will see report after report of pit bull attacks.

Just in the last few days:

A pit bull was shot to death by police after it attacked a woman who was walking her dog in Long Beach, Calif.

The pit bull also attacked two bystanders who tried to help the woman.

Police tried to stun the dog using a Taser gun, but it did not work, so the officers had to shoot and kill the dog!

A 2-year-old pit bull attacked a 7-year-old boy in a back yard in Charlotte, N.C., seriously injuring the boy. The boy needed 20 stitches for his wounds. Authorities will decide this week whether to euthanize the dog.

A Pottsville, Pa., couple were hospitalized after being attacked by their own dogs, which authorities said were likely pit bulls. The dogs were first fighting between themselves, then  turned on the owners.

Are pit bulls so dangerous that their owners and landlords should be strictly liable for damage a member of that breed causes even if that particular animal has never been vicious in the past?  It’s hard to say without a hard look at all the data.  One thing we know for sure is that a responsible owner can minimize the risk of an attack by any breed of dog by properly socializing, rearing, training and restraining the dog.  Conversely, a dog owner who fails to do these things, or even worse, encourages protective and aggressive behavior towards people and other animals, has a much greater risk of injuring someone else.

What do you think?  Are pit bulls inherently dangerous?  Are they simply the victim of bad press?  Let us know what you think!