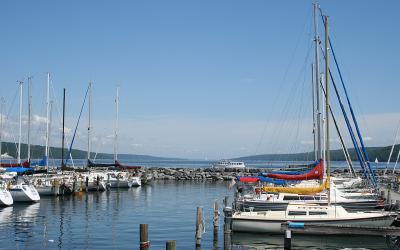 June’s barely begun, and already there’s been a serious boating accident on an area lake.

The accident happened Saturday night, and police are still investigating the cause at the time I write this. A family was out in a 25-foot Bayliner – two young teenagers alseep in a forward cabin, with mom and dad operating the boat. Perhaps she was unfamiliar with the layout of the lake, or there was some other cause – but Wendy Taylor ran into the breakwall near Cargill Salt in Watkins Glen.

Both Wendy and her husband William were hurt. Luckily their 12- and 14-year-old sons were unharmed.

I recently blogged about New York’s boating laws in a post titled “Know NY’s Boating Laws Before You Take to the Water.” There are many causes of boating accidents. Boat crashes are particularly dangerous because of the size and momentum of boats. They don’t stop and turn as well as cars do, and when there’s an accident, there’s more likely to be serious injuries. A plethora of emergency services had to come to the scene to help.

Deputies say 32-year-old Wendy Taylor of Church Road in Reading Center was operating a 25-foot Bayliner on Seneca Lake when she ran into the breakwall in front of Cargill Salt near the mouth of the canal at Watkins Glen.

Taylor suffered a laceration to her left eye and a shoulder injury.

Her husband William Taylor, 35, sustained facial fractures. Both were transported by ambulance to Schuyler Hospital for treatment.

The couple’s 14-year-old son and 12-year-old nephew were asleep in a forward cabin on the boat and were not injured.

The boat was extensively damaged. The Watkins Glen Fire Department, Watkins Glen Police and state police assisted at the scene.