Pennsylvania Tanker Crash Is a BAD Sign of the Changing Times 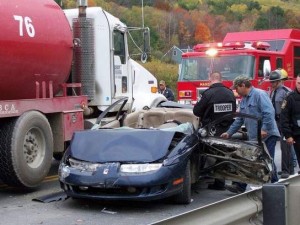 A horrific rear-end tanker truck crash in Tioga County, PA forced the emergency airlift of two young men from Wellsboro.  Sad to say but I think this crash, and many other recent crashes like it, are just the tip of the iceberg for what I expect will be MANY more serious truck vs. car accidents in our area.

As an injury lawyer who has handled countless New York and Pennsylvania car crash cases over the last 25 years, I have started to see a disturbing new trend of many more large truck vs. small car accidents.  This trend is the direct result of the greatly increased truck traffic in the Twin Tiers area due to the gas and oil exploration and drilling.  Everywhere you go in the area– Elmira, Horseheads, Corning, Wellsboro, Towanda, Waverly– you see huge trucks– tankers, dumptrucks, drilling rigs– and you see the effects of all this truck traffic– crumbling roads, mud smeared roads, leaking fluids.  But we are also seeing a huge increase in very seriously people due to car and truck crashes.  Car accidents always have the potential for serious injury but when you combine the substantial weight of these big trucks running in to much smaller vehicles you have the recipe for disaster– catastrophic injuries and death.

Although many in the community talk about the good things that the gas drilling can bring to the area, many forget about the downsides.  Sad to say but I fear that we are going to see more of our friends and neighbors injured by big truck accidents.  We all know that these big trucks are often going too fast, can’t slow down as quickly as a car and are often operated by tired drivers who are working 12 hours shifts 14 days in a row.

Like I said, this is a recipe for disaster……  Now don’t get me wrong, as an injury attorney handling truck accident cases, I know this trend will be good for my business but as someone who lives here, whose family lives here, whose friends live here, I am deeply concerned about local safety.  Long ago, I learned that if I do a good job for my clients, I will have no shortage of work and fortunately that has always proved to be true.  Accordingly, I can honestly say that I am not looking to see any more people injured and I would be quite happy to see fewer injured people.  In fact, as someone who sees first-hand the devastation suffered by the seriously injured, I do everything in my power to educate people to be as safe as possible to avoid injury.  But what I know is that none of us can control the actions of other drivers and that’s why I am so concerned about the local consequence of the increased truck traffic.  I hope I am wrong about this trend……..

Here is the story by the Elmira Star-Gazette that got me thinking about this issue as posted:

A Wellsboro teenager and his passenger were injured Tuesday when the car they were in was rear-ended by a water truck in Richmond Township, Tioga County, Pa.

State police at Mansfield said Michael T. Watkins, 19, and Joshua E. Bailey, 22, were airlifted to Robert Packer Hospital in Sayre after the crash, which occurred near U.S. Route 6 and Westgate Road.

The crash took place around 10:50 a.m. when the water truck struck the rear of the passenger car, operated by Watkins, as the car was waiting to turn onto Westgate Road.

Watkins and Bailey were extricated from their vehicle by mechanical means and were flown to Robert Packer Hospital by Guthrie Air and Lifeflight.

The truck operator, Michael Brostrom, 37, of Wellsboro, was ticketed for driving at an unsafe speed.

Police said Watkins was not wearing his seat belt.