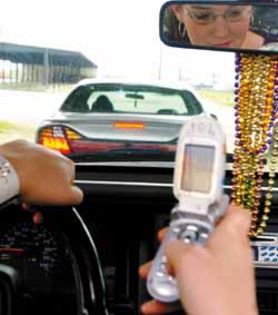 Pennsylvania has cracked down on drivers who text, but its ban does not go far enough.

There is more great news this week on the texting while driving front.

Pennsylvania will follow New York’s lead and outlaw the ultra-dangerous texting while driving. As lawyers who handle car accident cases in both PA and NY, we are very pleased to see this change in PA law!

It’s a great but late start. Unfortunately, the legislation does not go far enough! Yes, the new law, to take effect 120 days after Gov. Tom Corbett signs it, does outlaw texting while driving. But the Pennsylvania House, in an indefensible move, will continue to allow distracted driving by allowing drivers to use cell phones without hands-free devices.

In September, I wrote about New York cracking down on drivers who text. New York outlawed talking on cell phones without hands-free devices years ago! The state toughened its texting while driving law in July by increasing penalties, then in September, police agencies targeted violators, sending a message to drivers: Get your eyes back on the road!

The new law in PA makes texting behind the wheel a primary offense (just like NY), so police can pull you over for that violation alone. The penalty is $50. Police, however, will not be able to seize cell phones or other devices.

PA motorists can still talk on cell phones without hands-free devices, despite years of attempts by the PA Senate and some PA House lawmakers to outlaw it, The Associated Press reports. Nine states, including New York, have such bans.

According to AP, the bill that passed the Senate in June banned texting and talking on a cell phone without a hands-free device. But after the House approved the texting ban on Monday, House Majority Leader Mike Turzai, R-Allegheny, said that his chamber would continue to consider a ban on talking on cell phones.

Can Mr. Turzai explain why they need to CONTINUE to consider the ban on cell phones without hands-free devices? What is the argument?

The AP also said Corbett last week signed into law tougher new regulations for teen drivers, including limits on how many passengers they can carry and more stringent training requirements.

OK, drivers and passengers in Sayre, Towanda and the Twin Tiers: Should PA approve that last piece of legislation and ban all electronic distractions for drivers?

Please add your voice below in the comments section. I want to know what you think!