A Seneca Falls woman was killed and three others were hopsitalized Thursday afternoon in a three-vehicle crash on state Route 89 near Willow Point Road, northwest of Ithaca in Tompkins County. Several crash victims were trapped in their vehicles and rescued by emergency workers. 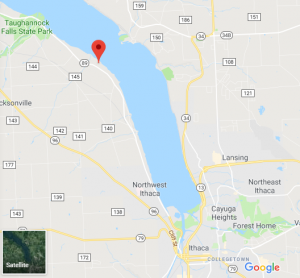 State troopers told the news media that at about 3:20 p.m., a Chrysler Pacifica minivan, driven by Kathleen M. Cole, 53, of Seneca Falls, was traveling south on Route 89 when the vehicle crossed the centerline of the two-lane highway and struck a northbound Toyota Camry driven by Jennifer L. Myers, 57, of Trumansburg, and then struck a Chevrolet Camaro driven by Jonathan P. Hockenjos, 30, of Sayreville, N.J.

Marguerite  Cole, 86, a passenger in the minivan, was pronounced dead at the scene. Kathleen Cole was flown to Upstate University Hospital in Syracuse, according to state troopers.

Myers, the driver of the Camry, was not injured but Hockenjos and his 19-year-old passenger, Sabina R. Marra, 19, of New York City, were also flown to Upstate University Hospital.

State police said the three victims were in surgery Friday and did not release any information about their conditions during the weekend.

Three helicopters responded to the scene. Two landed at Taughannock Falls State Park and one landed at Cayuga Medical Center.

Crashes occurring when a vehicle crosses over into the oncoming lane are some of the most dangerous that exist. The combined velocity of the two vehicles moving toward each other results in extreme high-energy collisions. Unfortunately, the proliferation of technology in vehicles and handheld electronic devices makes today’s drivers more distracted than ever before. It only takes an instant of inattention for a distracted driver to cross over the centerline, and the results can be deadly.

Our thoughts are with all of the individuals and families affected by this terrible crash.