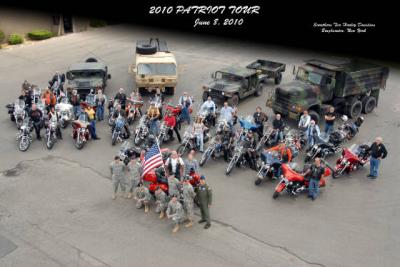 Since shortly before Memorial Day, a cross-country tour has been bringing attention and honor to our nation’s wounded soldiers and earning money to help them and their families.

The 2010 Harley-Davidson Nation of Patriots Tour is a fundraiser and an effort by Harley-Davidson owners to bring attention to the sacrifices our military forces have made. More than 150,ooo motorcyclists will participate nationwide; the tour recently passed through the Twin Tiers. The riders at each leg of the tour pick up an American flag to carry and pass on to the riders for the next leg. The photo with this post is of the riding group and soldiers, June 8 at Southern Tier Harley-Davidson in Binghamton.

The tour began May 28 at a Harley-Davidson store in Oconomowoc, Wisconsin. It’s the hometown dealership of the tour’s founder, Bill Scherer. The tour that Scherer started in 2009 will cross 48 states in 100 days. Check out the Nation of Patriots home page to see a map and locate the riders’ current location (as I write, it’s Binghamton, New York!). WETM-TV reported on local riders participating in the tour in the online story “2010 Patriot Tour”; a copy of the story is pasted below.

As a New York and Pennsylvania motorcycle accident attorney, I think this charity is a fantastic idea. It puts together  Harley riders from across the country all riding and raising money for a common cause.

(Reported by Sofia Ojeda on WETM-TV)

Painted Post, N.Y.- Harley Davidson riders across the country are honoring our nation’s troops.
It’s all part of the 2010 Patriot Tour.
3 Harley Davidson riders left Painted Post and headed to Binghamton Monday morning carrying the american flag.
The riders were part of the tour carrying the flag through 48 states in 100 days.
They rode a little over an hour away.
There they would hand off the flag to another group of riders.
Paul Koekebacker says, “You should honor our troops and fallen veterans in any possible way. We got a lot of families paying a big price for some of these things, it’s one way to recognize it, to honor it. If you can take a flag, the same flag and go to all 48 states, i think it’s important to do that.”
Stan Mosher says, “It’ll leave Binghamton tomorrow and go to Albany then from there it goes up to New England back down the East Coast to Florida, across the United States up the West Coast and back to Wisconsin.”
The tour began in Wisconsin on Memorial Day.
The tour will end there on Labor Day.