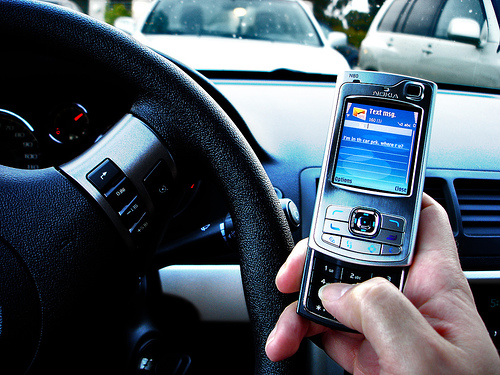 New York State’s tougher texting while driving law is being enforced more across the state. Maybe drivers are starting to get the message!

Police departments in New York State handed out more than 20,000 tickets in the first year of the state’s tougher texting-while-driving ban!

That is four times the amount of tickets issued in the previous year, state officials announced, according to a story in the Star-Gazette.

Gov. Andrew Cuomo signed the bill banning texting-while-driving a year ago after there were several fatal accidents involving teenagers who were texting while driving. The law took effect July 12, 2011.

According to the Star-Gazette story, the law allows police to pull over drivers specifically for texting. A law in 2009 made texting a secondary infraction, meaning police could only issue a ticket if a driver was pulled over for another offense, such as erratic driving.

The law also increased the penalty for drivers using a handheld device from two points to three points on their license.

We have written a lot on this blog about the dangers of texting while driving because we feel it is very dangerous. We want to continue to do our part to remind residents of Elmira, Corning and the Twin Tiers to NEVER TEXT WHILE DRIVING (OR TALK ON YOUR CELL PHONE WITHOUT A HANDS-FREE DEVICE).

The local numbers are startling, too. Chemung County jumped from 27 tickets to 92 tickets, Tompkins County from 20 to 139, Tioga County from 13 to 67, and Steuben County from 14 to 108. Schuyler County apparently had little enforcement of the new law; the increase was from just three to four tickets!

More than 3,000 people died last year in accidents blamed on distracted driving, according to the National Highway Traffic Safety Administration.

Remember that texting while driving is not just about you — it’s about making sure the people driving near you – and their passengers – are safe, too! Same with pedestrians, bicyclists and motorcyclists!

Put the comb or hairbrush down. Put the phone down. Wait until you stop to eat. If you’re sleepy, pull over and take a nap, or stop driving for the day!

Focus on the present when you are driving. That will save lives.

We have written a lot about texting while driving. I would encourage you to learn more about this important issue by reading our previous blog posts.

Thanks for reading, and focusing on the road!