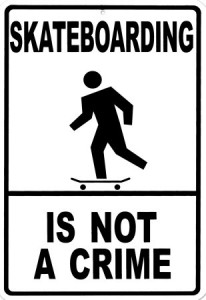 My hat is off to Elmira Police and the local residents who assisted the police in identifying the hit and run driver who hit the 18 year old skateboarder on Hoffman Street in Elmira, right in front of EFA High School.  As you might imagine, it can be tough to track down hit and run drivers but it’s nice to see that with hard work, persistence and the assistance of eyewitnesses, the police were able to track down the cowardly driver who hit this poor skateboarder.  Although the police have located the driver, they have not publicly released the driver’s name at this time.

From my perspective, I am glad that this driver has been found and I hope he is prosecuted to the fullest extent of the law!  How someone could run down another person and then leave them to die on the side of the road is beyond me……

The hit and run driver will likely be facing a long list of very serious criminal and vehicle & traffic charges:  Leaving the Scene of an Accident, Failure to Yield the Right of Way, Imprudent Speed, Following Too Closely, etc.

In addition to these criminal charges, the driver will also be liable in a civil lawsuit for the injuries and damages his negligent driving has inflicted on the skateboarder.  The skateboarder will need to pursue coverage for his medical bills and lost wages from the insurance carrier for the driver and often times that coverage is insufficient to cover the full extent of the bills so the skateboarder may need to pursue additional coverage from other sources like his own health insurance coverage, coverage from his own car or another car in his household, crime victim trust funds, etc.  Unfortunately, all of these insurance coverage issues can become very complicated so my best advice to this skateboarder is that he should talk to an experience personal injury lawyer ASAP who can guide him through the complex maze of these insurance issues.

As to the skateboarder, he has now been identified as Timothy Olson of Elmira.  The Elmira Star-Gazette (full story below) lists Tim as still being in critical condition at the Arnot Ogden Medical Center. My best wishes go out to his family for a quick recovery.

Elmira police on Thursday said they have found the driver involved in the recent hit-and-run accident with an 18-year-old man on a skateboard, and released the name of the injured man.

Police said Timothy Olson, 18, of Elmira, was injured in the Tuesday night accident on Hoffman Street in Elmira He was listed in critical condition Thursday night at Arnot Ogden Medical Center.

Police did not release the name of the driver, citing an ongoing investigation into the incident.

Police said they used tips from local citizens to find the driver.