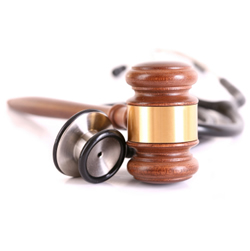 I wholeheartedly agree with this Guest View. Rather than blaming the lawyers for the fictitious “lawsuit crisis,” why don’t we blame the true culprit — the parties responsible for injuring innocent people.

The doctors and hospitals that commit malpractice injuring more than 98,000 people a year…

The nursing homes who neglect their elderly patients…

You get the picture. I’ve reposted a copy of the column below:

In Washington, President Obama has said he would be open to suggestions about constraining lawsuits by victims of medical malpractice – and insurance companies and medical organizations are making their case.

In Albany, buttressed by so-called “research,” business advocates are launching their own campaign to insulate negligent entities from having to compensate those they injure.

Lawyers and lawsuits have been attacked politically for years, but in reality, civil lawsuits shine a spotlight on wrongdoing, call the offenders to account, deter future misbehavior and provide justice for people who have been hurt.

Repeated studies have shown that approximately 100,000 people die each year due to medical malpractice in our nation’s hospitals. These are not simply bad outcomes that were unavoidable; they are instances where physicians or hospitals failed to meet the normal standard of care – where other physicians deemed the damage done to have been avoidable.

If a hospital, for example, allows an expectant mother to lie in one of its labor rooms, fails to notice for several hours that the fetal monitor shows the fetus in distress, and the child is born severely brain damaged, should that institution be protected from a lawsuit? How is that family going to pay for a lifetime of care for their child? What incentive is that hospital going to have to correct its procedures to prevent such an incident from ever happening again?

State authorities normally don’t have the power to impose more than minor sanctions in cases like this. The one avenue that leads to a fair outcome is a lawsuit. That family should not be told there is an arbitrary cap on the amount of damages they can receive. They should have the right to have their case heard and decided by a judge and jury in an open courtroom.

This is not a new debate. No one likes to be sued and companies, hospitals and insurers have argued for years that lawsuits should be curbed. They point to a few cases where courts awarded large sums to injured parties. But they ignore some key facts:

These cases often take years to come to a conclusion. Lawyers working for contingency fees don’t get paid unless they win. It would be ludicrous for someone in that position to file a frivolous lawsuit.

There are checks and balances in the system. If someone files a frivolous lawsuit, a judge can sanction the lawyer for doing so and dismiss the case. If a jury awards too large an amount, a judge can reduce it. If the losing side disagrees with the result, they can appeal.

It’s easy to see the benefits to the individuals involved and to our society of these lawsuits.

Usually, the people who bring these lawsuits are not people of means. They have no way of fighting back except through our court system. And without lawyers who were willing to work on a contingency fee basis, they would never be able to sustain an action against these deep-pocketed entities.

Anyone who wants to reduce the number of lawsuits should focus on reducing the type of negligent behavior that harms people and causes them to sue. Ignoring the underlying causes and simply blaming the victims and their lawyers for suing undermines an important safeguard that our civil justice system provides to all our citizens.