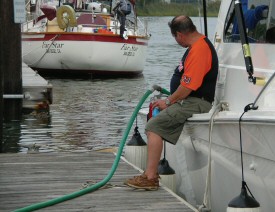 Summer boating season on lakes and other waterways in New York and Pennsylvania is here!  As we prepare to head back out on the water, there are a whole host of things we need to be concerned about to make sure our boating trips are safe.  What some boater fail to recall, though, is that the most important safety issue they face may face all day occurs before they ever leave the marina.

Boaters are used to being warned about alcohol, speed and safety vests.  But a May 31 fatal accident in Erie, Pa., serves as a stark reminder of the dangers boaters face when refueling.

A 25-year-old Erie woman was killed and nine others, including a 2-year-old child, were injured when a 32-foot Wellcraft exploded after refueling at the Erie Yacht Club.

The Pennsylvania Fish and Boat Commission is leading the investigation with the Erie Bureau of Fire, according to news reports.

Erie fire investigators told the Erie Times-News newspaper that they believe a faulty gasket in one of the boat’s two tanks, which combined can hold 200 gallons of fuel, allowed gas fumes to back up into the boat’s engine compartment instead of being blown out.

The buildup of fumes fueled an explosion that investigators said was set off when the boat backfired as the boat’s owner tried to start the boat after refueling, the newspaper reported.

Here is the latest news: Investigators will now meet with experts to try to determine the cause of the explosion, the newspaper reported June 12.

Fuel fires or explosions caused three deaths and 113 injuries in boating accidents nationwide in 2009, according to the most recent information from the Coast Guard.

Remember that boating safety begins at the dock!

During our too short summers I am on Keuka Lake with my family as often as weather permits.  Fellow Ziff Law attorney Jim Reed spends his summers on beautiful Seneca Lake.  We are boaters ourselves, and know the pressure that Captain Dad is under to get the family out on the water as soon as possible.  There are so many things to remember, and most of them take time to address.  I have experienced the temptation to fire the boat up immediately after gassing up.  The boat is full of kids intent on a day of swimming, sunning, skiing and tubing – the cooler is packed  – the sunscreen is on  – everyone wants to get started.  It is at this point that we have to do the responsible thing.  Turn on the blowers, open the hatch and sniff for gas, make sure that everything is safe before you turn that key. The tragedy in Erie, Pennsylvania that inspired this story is a horrific reminder of what can happen when we take shortcuts.

Thanks for reading, and stay safe on the water this summer!