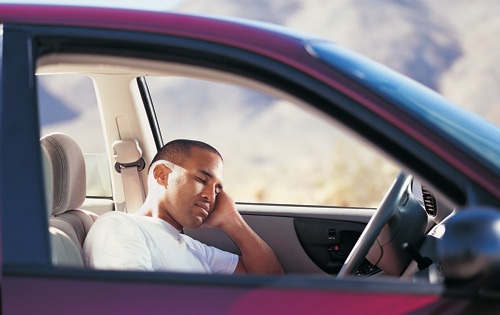 Pull over and find a safe place to take a nap if you're feeling sleepy.

New York State Police say a Schuyler County man likely fell asleep at the wheel of his car shortly before his vehicle crossed the center line and struck another vehicle head-on on Saturday in Seneca County, according to WETM-TV.

Our thoughts and prayers are with Mr. Fallon’s family and the Colavitas.

The accident, on state Route 414 in Lodi in front of the Lodi firehouse, is the latest reminder of the dangers of driving while you’re sleepy.

Drowsy drivers are a menace on our roadways. If you’re sleepy but you think you can drive anyway, you’re probably wrong! Pull over and take a nap or get a cup of coffee. If you won’t stop, open the windows and let some fresh air in, and turn up the radio or CD.

The National Sleep Foundation’s website has some chilling statistics and facts worth checking out. I recommend it as important reading to everyone who drives.

Among the statistics: According to a 2005 study, 60 percent of adult drivers said they had driven while drowsy in the past year, and 37 percent said they fell asleep at the wheel!

Of that 37 percent, 13 percent said they nodded off at least once a month and 4 percent admitted they had an accident or near-accident because they dozed off or were too tired to drive!

Remember those statistics the next time you ht the road and begin feeling drowsy. Put your safety, and the safety of everyone else on the road, including pedestrians, bicyclists and motorcyclists, first when you turn the key.

Go to the foundation website for plenty of helpful information, including a look at drivers at risk, warning signs and how to prevent drowsy driving.

Residents of Elmira, Corning and the Twin Tiers, do you drive while drowsy, and what do you do to keep yourself awake? Please comment below.

Thanks for reading and sharing your comments!