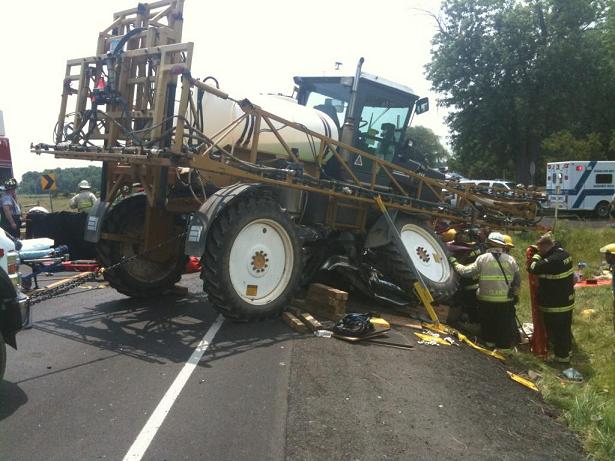 Police said a drunken driver who passed a farm vehicle in a no-passing zone on a curve triggered a van-tractor accident that killed five Amish farmers Tuesday afternoon in Yates County.

Ronald Spike, the Yates County Sheriff, told the Rochester Democrat and Chronicle newspaper that a large, slow-moving farm tractor with spray equipment attached was traveling north on Pre-Emption Road at about 12:45 p.m. Tuesday when Steven Eldridge, 42, of Penn Yan, the driver of a vehicle behind the tractor, decided to try to pass.

Police said Eldridge veered into the path of a minivan full of adult Amish farmers. “(When the driver) collided with the van, it drove the van over into the path of the farm tractor and the van actually went underneath the tractor,” Spike said.

“This was a horrific accident scene,” said Sheriff Spike. “I’ve been in this business 40 years and it’s the worst I’ve ever seen.”

Eldridge has been charged with five counts of criminally negligent homicide, driving while intoxicated, reckless driving, unsafe passing, speed not reasonable and prudent, and failure to keep right after passing.

Signs near the intersection urge drivers to slow down and warn of slow-moving farm vehicles on the road, the newspaper reported.

It was the area’s second mass casualty crash in three days. A tour bus crash Sunday on Interstate 390 in Steuben County killed two people and injured 35 others.

Our hearts go out to the Steuben County Amish farmers and the families of those who were killed or badly injured in the horrific collision.

This collision is so sad on so many different levels but it is doubly so because it is a collision that should have never occurred!  Per the police investigation, this collision was caused when the drunk driver of the car made the idiotic (and illegal!) decision to pass a slow moving farm vehicle in a no-passing zone and on a curve.

We live in the beautiful Finger Lakes area of Upstate New York where farming is a way of life.  Farm vehicles are to be expected and respected on the local roads.  Most times the farm vehicles are only going a short distance on the road so there is absolutely no good reason to hurry to pass them.  Only pass when you can do so safely.  It is the law.