DOT Worker Hurt By Trucker Who Is Accused Of Violating Move Over Law, Says NY and PA Personal Injury Lawyer

A tractor-trailer driver is accused of violating New York State’s Move Over Law after police said his truck struck a New York State Department of Transportation vehicle, injuring a DOT employee, Wednesday morning in a work zone on State Route 17 in the town of Nichols in Tioga County, N.Y. 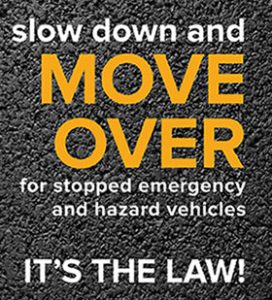 The truck driver, Lawrence Faucett, 37, of Ulster, PA, was ticketed for Failure To Move Over and Moving From Lane Unsafely.

The NY Move Over Law requires cars to move over and slow down, if they can safely do so, for police, firefighters, ambulance workers, tow-truck drivers and other personnel as they work at crash scenes. Motorists are similarly required to move when construction and maintenance vehicles are stopped alongside roads – this includes NYS Department of TRansportation Vehicles who care for our highways.

The law, first enacted in 2011, was expanded in July 2016 to include volunteer firefighter and ambulance workers. In November 2016, sanitation vehicles, such as garbage and recycling trucks, were also added.

According to the New York State Department of Motor Vehicles, more than 100,000 people have been ticketed for failing to move over since 2011, including more than 12,000 in 2018.

The penalty for violating the Move Over Law is a fine of up to $150, or jail time of up to 15 days, or both. It also counts for two points on a driver’s license. A second offense within 18 months of the first one could double the amount of the fine, pushing it up to $300. A third offense in 18 months could lead to a fine of up to $450.

There are also steep state surcharges on moving violations: $88 or $93 upon conviction for violating New York’s Move Over Law, and there’s an impact on vehicle insurance: Studies confirm that being convicted of a moving violation can result in a rate increase of up to 20 percent, sometimes more.

The Move Over Law is important – it protects vulnerable people who are forced to work at the edges of roadways where cars, trucks and tractor trailers are flying by mere feet away.  Because the protected people are busy doing their job, they can’t pay as much attention to traffic as they would like.  When people violate the move over law, the results can be tragic, and injuries are certain to be very serious because of the speed of the moving vehicles.

The Move Over Law is a common sense solution to give the protected workers room to do their jobs, so move over, slow down, and make sure everyone goes home safe at the end of the day.