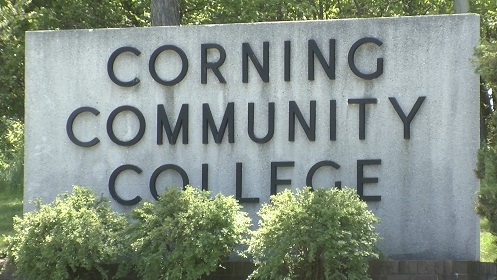 An 18-year-old Painted Post man, a student at Corning Community College, was killed Monday morning in a three-car accident on Spencer Hill Road, the winding, at-times treacherous two-lane road that connects the college with the city of Corning.

According to news reports:

Police said Justin A. Lewis was driving away from the campus at about 11:50 a.m. when he lost control of his vehicle and struck two other cars on a long curve near the main entrance.

Lewis was pronounced dead at the scene by the Steuben County Coroner. The two other drivers, including another CCC student, were hospitalized following the crash. The injuries were not considered life-threatening by police.

Police said excessive speed may have been a factor in the accident. Lewis’ vehicle crossed the center line, struck the two other vehicles and a cement rock wall.

Traffic was rerouted for the rest of the day off Spencer Hill Road as police reconstructed the accident.

The college issued a statement after the tragedy: “Our thoughts and heartfelt prayers go out to those involved in this accident, and to those family members and friends of the student who lost his life in this tragedy.”

Vincent Spagnoletti, commissioner for the Steuben County Department of Public Works, said major safety improvements were made during the summer of 2009 to Spencer Hill Road, also known as County Route 40. The road experiences heavy student traffic and has been the site of many accidents over the years.

The section of road where Monday’s accident happened was widened, trees were taken down on the inside of the curve so drivers had better visibility and rumble strips were added along the road to warn drivers who swung wide on the curves into the oncoming lane, Spagnoletti said.

Our thoughts and prayers at the Ziff Law Firm also go out to Justin’s family and friends.

Spencer Hill Road is one of the most treacherous and well-traveled roads in the Twin Tiers because of the number of young drivers on the road most days. If you or someone you care about is a student at CCC, let this accident be a sad reminder of the dangers posed on that road every day.

The campus attracts students from all over the Twin Tiers, from Bath and Hornell east to Waverly, Sayre and Towanda. It also draws students from Schuyler County, including Watkins Glen, from Elmira, Horseheads and Big Flats in the Southern Tier, and into Wellsboro and Mansfield and other points south of the Pennsylvania border in the Northern Tier.

Today, if you’re one of the Twin Tiers residents driving on Spencer Hill Road, remember Justin and respect one of our most dangerous roads.