For some strange reason, ESPN failed to provide prime time coverage of an epic sporting event…. 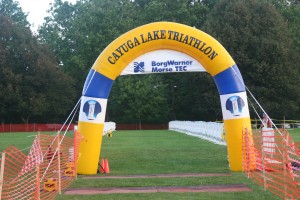 Yesterday was the legal triathlon showdown between two Upstate NY law firms — the Ziff Law Firm from Elmira, NY versus their nemisis from the North, the Schlather, Geldenhuys, Stumbar & Salk firm from Ithaca, NY.

The action took place at the Cayuga Lake Triathlon, Ithaca, NY which was the National Sprint Triathlon Championships! There were more than 700 half-naked, super-buff bodies (sadly, we are not counting our bodies among the “super-buff) competing in a tremendously well-run event (Hats off to the Race Director Jane Miller!).

Keep reading to learn who won the showdown!!

RAY SCHLATHER THREW DOWN THE GAUNTLET AND THE CHALLENGE WAS ON!

Several months ago, Ray Schlather, a fellow personal injury attorney from Ithaca, NY casually suggested that Ziff Law should enter a team in the triathlon. Little did he know that this was like throwing red meat to the lions because the Ziff Firm had just hired uber-competitor, Christina Bruner Sonsire, as a trial lawyer.

For those who don’t know Christina, to say that she is super-competitive is a monstrous understatement! Christina was a record-setting Division 1 soccer player at Georgetown University despite the fact that at 5’1″ she’s half the size of most of the women she was competing against. Lately Christina has taken to running– not a little bit, a LOT– marathons, half-marathons, trail runs, road races– you name it, she’ll run it.

So Ray casually suggests that we enter a team and Christina runs with the idea. First, she comes to me (Jim Reed) and asks if I am willing to race. I gladly sign on because up until a few years ago, I did LOTS of bicycle racing and I had taken a break from the racing circuit so I could spend more time with my three teenagers. But, unfortunately, I am the type of guy who needs a planned race to motivate me to train hard and eat right. Somehow, in a few short years away from racing, 20 lbs suddenly appeared on my scale and as much as I hoped that the scale was broken, I knew it was time to get back in the saddle! This was just the “call to action” I needed!

Next Christina approached ZiffLaw Attorney to see if he would be the team’s swimmer. This was a little harder sell. You see, Adam is a very competitive guy himself but his competitive energies had always been focused on sports where you beat the other guy up (wrestling and hockey) rather than beating yourself up swimming an open-water, half mile swim. Did I mention that Adam had never done any serious swimming before?

Well, Christina is pretty darn persuasive and before Adam knew it, he too was committed.

SO THE RACE TRAINING STARTS IN EARNEST– CAN YOU SAY “OUCH”?!!

All three members of Team Ziff began training. For Christina, this was absolutely no change from what she was already doing. However, this was a wee bit more painful for Adam and me. You see, I am 47 years old now and needless to say, taking off a few years of racing and gaining 20 lbs is NOT a great recipe for an easy return to racing. I started riding more and eating MUCH less which is a tremendoulsy painful combination. But I just kept plugging away and was very pleased to lose more than 15 lbs by race day. Man, did it feel good to get back in to some semblance of shape!

Adam hit the pool and he would periodically indicate that he discovered new muscles that he never knew he had. My wife, Meg, a great swimmer and super triathlete herself (before spinal fusion surgery ended her running) offered to help Adam with his swimming but being a “stubborn male”, he just tackled the swimming on his own and once in a while we would hear cryptic reports that his swimming was going “OK”.

THE TRAINING IS OVER, IT IS RACE DAY, IT IS SHOW TIME! 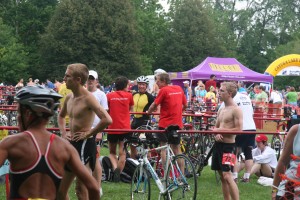 The race day forecast was a little bit concerning– 65 degrees (that’s great), 14mph winds out of the north (that’s bad if you are the cyclist and the course runs north!). The day before was all rain and it’s spitting and sputtering rain as my alarm goes off at 5am so I can make it to registration by 6:45am. But heck, I revert back to my old race-day practice talking to myself to psych myself up– “the wind is blowing for everyone, the rain is raining on everyone, don’t be a weenie…” But most of all, I find that I really LOVING the idea of getting out there and competing again which is a true surprise because I secretly thought I would be dreading it.

I drive over to Ithaca to Taughannock Park, just eight miles north of Ithaca, NY (a truly beautiful park that you should definitely visit or re-visit–well worth the trip). The whole park has been transformed in to what looks like an Olympic venue– huge tents, finish line chutes, banners and fences, hundreds of cars and athletes. Wow, this is awesome!

I find Adam and Christina and they both look really excited to get racing. Because we are doing the Team Relay we know that we will be starting in the final Wave of racers (there were 8 separate waves of approximately 100 racers in each wave).

Finally, it’s almost time for Adam to start the swim. I hear the horn sound and I know Adam is in the water. While he’s off swimming, I am warming up on the bike and Christina is warming up running.

The swimmers begin to emerge from the water and soon I see Adam in full wet-suit and goggles running down the path to tag me so I can begin the ride. I can tell he’s exhausted but he’s giving everything he’s got to get to me as fast as possible.

He tags me and I am off on the bike as fast as possible. I am passing people as fast as I can the whole time thinking– be strong, be fast, keep your head low, don’t think about the head-wind, etc. The miles tick by. The first couple miles are all uphill but soon I see my wife and a couple of my buddies out on the course cheering me on. Feels great. People along the course ringing cowbells and cheering. Very cool. I hit the turn-around mark and start back to the park. Hey, where’s the tailwind I should have now? Damn swirling Upstate NY winds! Oh well, the self-talk begins: “everyone has the same wind, get over it, keep your head down, pedal harder, don’t be a weenie!” Love it! Now it’s the last two miles– what was a tough climb is now a speedy descent. “Keep passing people, keep going”. I roar in to the park and jump off the bike and run to tag Christina.

Christina has her game face on!! Awesome! She sprints away as I try to catch my breath. I know she will be blazing on the run. Adam and I go over to the finish line area to anxiously await her finish. Finishers from the other Waves are finishing all the time so we get to watch the exhausted, muddy runners sprint to the finish. With national championships on the line, we see some great finishes. Soon, here comes Christina down the finishing chute. I yell “smile” because she has a look like she could run through a brick wall if necessary to get to the finish line. Man, do I love true competitors!

Christina finishes and we all stand around basking in that post-race glow of a good hard effort, the camaraderie of our fellow competitors, the gnawing thirst and hunger quenched with well-earned snacks. Can you believe they even had Purity ice cream and all the fixings for banana splits? Sure beat the usual post-race fare. Did I mention that the Race Director Jane Miller is The Best? 🙂

SO WHO WON THE SHOW DOWN OF UPSTATE NY LAWYERS?

Heck, who cares. We all had a great time and it was wonderful to be out there. Those folks from Ithaca are great people (and great lawyers) so who really cares who won or lost?

Well, OK, if you insist, I will tell you– very reluctantly of course!– that the younger, better looking, more charming Ziff Law Team managed to squeak out a victory!! 🙂 In fact, Ziff Law finished Second overall in the Coed Team Division. Not bad for a trio of duffers….. 🙂

Next year, it’s ALL about First place. Did I mention, I LOVE competition?

Thanks for reading (and sorry for the long post),