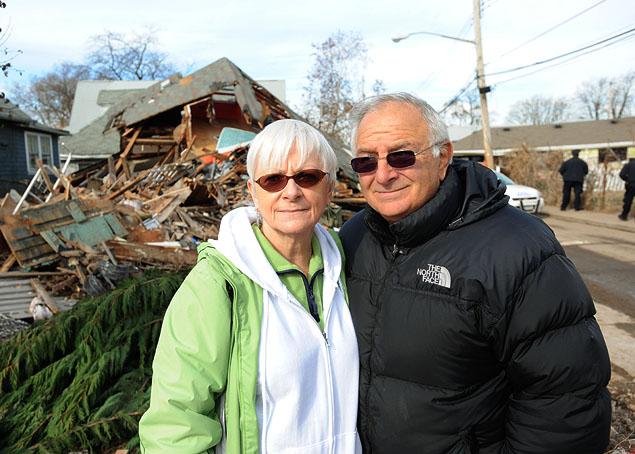 Sheila and Dominic Traina near their home that was destroyed by Superstorm Sandy during the fall. (Photo by The Daily News.)

The self-proclaimed “Good Hands” people at Allstate have slapped Dominic and Sheila Traina of Staten Island while they’re down, according to news reports from New York City.

The Trainas, Allstate customers for 43 years, lost their home to Superstorm Sandy in October and are still waiting for a settlement check from Allstate, The Daily News is reporting.

The Trainas have lived in the home for more than four decades.

Of course, the Trainas’ nightmare did not stop Allstate from using images of their flattened one-and-a-half-story home in a television commercial touting how responsive the insurance giant has been in a disaster.

“The commercial said how caring their agents are,” Sheila said. “But they are not caring at all.”

The Trainas, though, have become the face of the disaster on Staten Island. Their home has been featured in several fundraisers and their two granddaughters asked a visiting President Obama for help.

In a handwritten note back to the girls, Obama wrote, “I’m going to help.”

The Trainas turned down a $10,000 payout from Allstate, calling it inadequate, according to The Daily News.

Allstate declined to discuss the specifics of a pending claim with the newspaper, of course!

The Trainas said they are considering hiring a lawyer to seek a more equitable settlement. They should do that today!

The couple say the house where they raised their four children was destroyed by the wind and not flooding from the storm surge, making them eligible for a higher settlement with their primary insurance carrier, according to the News.

The Trainas told the News they believe their home was crushed in part by falling trees and its wreckage pushed back from the street by sanitation trucks.

To read more about the Trainas’ plight, click here.

So much for the Good Hands people – too bad Allstate’s actions don’t live up to their advertising!