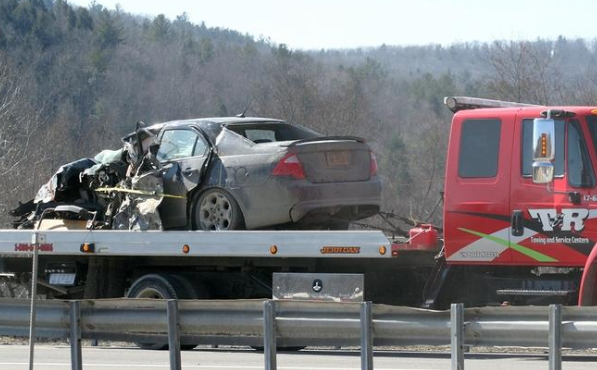 The 23-year-old driver of this vehicle was killed Wednesday morning in a crash involving an Addison school bus. (The Leader newspaper)

New York State Police have identified 23-year-old Kayanna Lehman of Addison as the driver of the sedan who was killed Wednesday morning when her car crossed the center line on a Steuben County highway and struck an Addison Central School District bus head-on.

Lehman was killed in the 7:45 a.m. crash Wednesday on state Route 417 in the Town of Erwin. There were no injuries on the bus, which had a driver and nine students, according to the school district.

Troopers said they don’t know why Lehman’s vehicle crossed the center line. Weather was not a factor in the crash.

Troopers said Lehman was pronounced dead at the scene. Two children in her vehicle were not injured. Both vehicles suffered extensive damage, troopers said.

The district sent the students on the bus to Guthrie Corning Hospital in East Corning for evaluation. The bus was transporting the students to a program outside the school district.

Addison Central School District Superintendent Joseph DioGuardi said that two of the children on the bus were elementary school students and the others were high school students.

There are seat belts on the bus, but DioGuardi did not know if students were wearing them at the time of the crash.