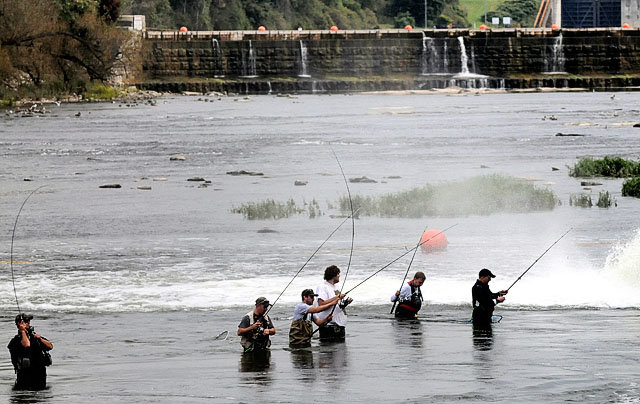 Two Chemung County fishermen were swept to their death in 2010 while fishing near this dam on the Oswego River. (Photo by syracuse.com)

A federal lawsuit I filed for the families of two Chemung County men who were killed after being swept away while fishing in the Oswego River has been settled for $1.8 million.

I hope the families of Leonard Nichols, 45, of Wellsburg, and Clifford Luther, 52, of Horseheads, can now find peace and come to terms with their loss. My heart continues to go out to the families.

While the families of these two men still suffer the pain and anguish of the loss of their loved ones, they are pleased that the power company that caused the deaths has implemented many new safety measures as a result of this tragedy, and it is their sincere hope that all people who fish near the power plant in Oswego will now be safer.

Mr. Nichols and Mr. Luther were fishing in the river on Sept. 28, 2010, when rapidly rising water carried them away. Mr. Nichols died that day in Oswego Hospital and Mr. Luther died a week later at the hospital.

The lawsuit, filed in the federal court in the Northern District of New York, was against a group of Brookfield Renewable Energy companies. The two men were fishing near the Varick Hydropower Dam, which is operated by Brookfield.

The lawsuit says the men died as “a result of drowning after a massive quantity of water was negligently, carelessly and/or intentionally released, without proper advance warning, into the Oswego River by the owners and/or operators of the power plant facility.”

Witnesses said that warning sirens of rising water first went off too early, then didn’t sound at all when the water rose later that day, sweeping away Mr. Nichols and Mr. Luther.

Brooikfield has now installed warning lights, new 911 and rescue stations, and ladders near the hydroelectric plant to improve safety as a result of the deaths and the lawsuit, according to news reports.

“This tragic loss of these two men reminds us all of the critical importance of public safety on our waterways and especially around hydropower facilities,” said Daniel Whyte, senior vice president of Brookfield Renewable Energy Group. “We express our deepest condolences to the family and friends of Mr. Luther and Mr. Nichols, and will continue to work with government and local officials, as well as the public to meet the highest standards of public safety.”