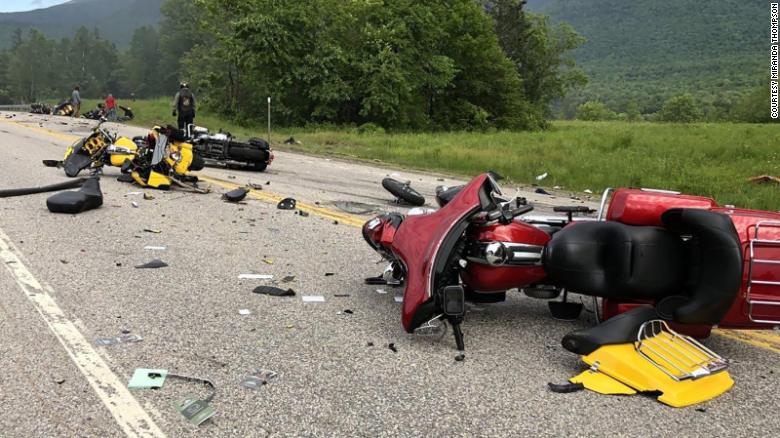 A Massachusetts truck driver was charged with seven counts of Negligent Homicide on Monday in the horrific collision Friday on a rural northern New Hampshire two-lane highway that killed seven motorcyclists and injured three others.

Volodymyr Zhukovskyy, 23, of West Springfield, Massachusetts, was arrested at around 8 a.m. Monday at his home by the Massachusetts State Police.

According to news reports Monday,when Zhukovskyy was arrested, Massachusetts State Police found packets containing a residue that authorities believe is heroin in his home. He has not been charged with drug possession yet, police said.

Investigators also said Monday that Zhukovskyy was charged with drunken driving last month in Connecticut. He was released after posting $2,500 bail. He was due to be arraigned on the charge on May 20, but the hearing was postponed because his lawyer had a scheduling conflict.

On Friday, police said Zhukovskyy was driving a 2016 Dodge 2500 pickup truck towing a flatbed trailer when his vehicle struck the 10 motorcycles at about 6:30 p.m. Friday on U.S. Route 2 in Randolph, New Hampshire.

Police said Zhukovskyy is an employee of Springfield-based Westfield Transport. The company said it is cooperating with investigators.

The news media has said the victims are members or supporters of the Marine JarHeads, a New England motorcycle club that includes Marines and their spouses. Members range in age from 42 to 62 years old. 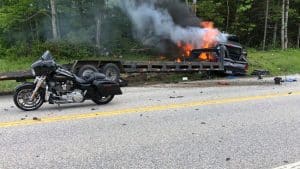 Dawn Brindley told reporters she was riding with the group when they collided with the truck.

“I was on inside,” she said. “I saw the truck, I think. I don’t even know. It was just all fire. I just laid my bike down and I just rolled. I just looked around. Somebody helped me up. I was just hysterical.”

The motorcyclists were on their way to an event at an American Legion post.

“The scene is pretty large and there’s a lot of work to be done,” New Hampshire State Police Capt. Chris Vetter told the news media. “I don’t know that I have ever seen a crash with this much loss of life. It was a pretty significant accident.”

According to more news reports Monday, records from the Federal Motor Carrier Safety Administration indicate that the company has faced various violations in the last two years, including two instances where drivers were in possession of narcotic drugs.

Other inspections led to the discovery of vehicle maintenance violations including inoperative or defective brakes, drivers who did not have a required CDL license, and unsafe driving violations like failure to stay in a lane and speeding 11 to 14 miles per hour more than the speed limit, according to records.

George Loring, a JarHeads member who was a few hundred yards from the crash scene when it occurred, said Zhukovskyy has to live with it for the rest of his life. “It’s so sad for the brothers and sisters who died,’ he said.