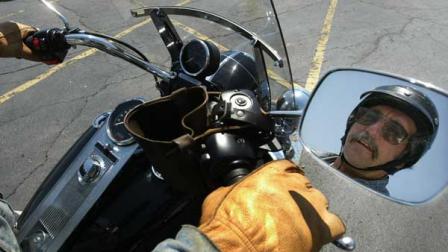 Vince Consiglio, president of ABATE Michigan, on his Harley-Davidson.

The American Bikers Aimed Toward Education (ABATE) group in Michigan is taking on mandatory helmet law supporters in its state after looking at the latest motorcycle accident records available.

According to a news report, the ABATE study says from 2011, before the mandatory helmet law was revoked,  to 2012, when the law changed, fatalities dropped from 89 to 85 — a 4.5 percent reduction. Adjusting the data to show fatalities as a percentage of motorcyclists involved shows a decrease from 3.24 percent to 3.05 percent — a 5.8 percent reduction, the study also said.

During those two years, the number of motorcycle registrations increased from 261,658 to 266,589, the study says.

You can read the Michigan group’s report here.

New York and Pennsylvania also have ABATE groups, if you want to learn more.

“While some media outlets are reporting a drop in Michigan motorcyclist deaths in 2012, the state’s traffic crash, injury and fatality information for the current year is provisional and changes on a daily basis,” the Michigan Office Of Highway Safety Planning said in a press release in response to the study. “It is not possible to conduct an analysis or draw conclusions regarding motorcyclist deaths until the entire year’s crash data is finalized sometime in the spring of 2013.”

“These figures will continue to change as additional crash reports are submitted by law enforcement agencies throughout the state,” the state’s safety experts said.

This new evidence requires that we take a second look at our preconceptions. Everyone has always argued hat mandatory helmet use will decrease injuries.  These statistics seem to indicate otherwise.  I have always argued that the easiest way to increase safety for motorcyclists is for the drivers of cars and trucks to look for and see motorcycles.

The ABATE Michigan president told the news media his group is standing by its numbers.

“This data proves conclusively that the helmet-law amendment had no adverse effect on motorcycle safety,” Vince Consiglio said. “What does matter is car driver/motorcyclist awareness and motorcycle education, which we have advocated for and provided to residents of Michigan for more than two decades.”

“A motorcyclist has a responsibility to know how to handle his or her bike,” Consiglio added. “However, a motorcyclist is much more vulnerable than a passenger vehicle occupant in the event of a crash.”

Consiglio offered tips for drivers to help keep motorcyclists safe on our roadways.

Consiglio said motorcyclists can be safer by:

Thanks for reading, and please add your comments below on this important story.