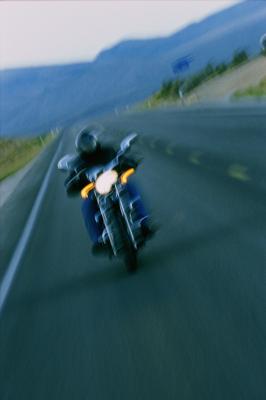 A fascinating article in a past issue of the British magazine Bike has an explanation for why car drivers sometimes just don’t seem to see oncoming motorcycles.

The secret to this theory is connected to the way in which predators act in the animal and insect kingdoms. Researchers discovered that a dragonfly, for example, uses a technique called “motion camouflage” to approach prey. Motion camouflage is based on the fact that when a creature or an object is coming directly at you at high speed, its motion is barely detectable.

It sounds strange but it’s true! The dragonfly was found to change its course when honing in on prey, making adjustments to fly directly into its victim’s line of sight.

I came across this story online at Motorcyle Info Pages, a British site packed with safety information for bikers. The blog post features images from the Bike article as well as further explanation:

Motion is difficult to perceive when it is directly along the line of sight. Because the object is stationary relative to the background, an observer doesn’t see a change in the overall image and thus isn’t cued to the presence of a moving object. Though the object increases in apparent size as it nears, the change goes unnoticed at first–moving from 1000ft distant to 900ft may not affect the image enough to trigger a response. A motorcycle is particularly susceptible to motion camouflage because its cross-section area as seen by an observer is much less than that of a larger vehicle.

Now the second part of the whammy against motorcyclists: When a driver does realize a motorcyclist is approaching rapidly, a second natural response kicks in and makes an accident more likely. This is called the looming effect.

For good or ill – and I’m sure there’s some evolutionary reason for this that didn’t take motor vehicles into account – people freeze when they realize something’s about to hit them. In the wild, perhaps this threw predators off, but on the road, it just makes for serious accidents when a driver stops dead in front of an oncoming motorcyclist.

Duncan MacKillop, a motorcycle riding instructor who first suggested a connection between motorcycle accidents and motion camouflage, had a simple and smart sounding solution. He tells bikers to ride in a way that takes them out of the cross-street driver’s direct line of sight.

To break the illusion of motion camouflage, Mackillop recommends riding in a path that diverges from the driver’s line of site if possible, and/or using a gentle zigzag motion to catch a driver’s attention.  People may look at you a little funny if you are zig zagging within your lane as you approach an intersection, but if it catches their attention and keeps them from hitting you it is well worth it.

Check out the full article at the Motorcycle Info Pages, and don’t forget what a great safety device science can be.