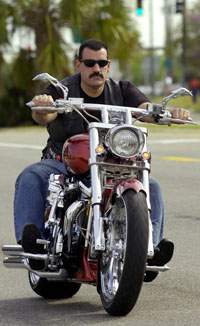 Oh, the irony.  A 55-year-old Syracuse-area motorcyclist who was not wearing a helmet during a protest ride against helmet laws was killed Saturday when he was thrown over the handlebars of his motorcycle and his head struck the pavement.

State police said Philip A. Contos of Parish, N.Y., was riding in the town of Onondaga, near Syracuse, at about 1:30 p.m. when his 1983 Harley-Davidson fishtailed and veered out of control after Contos applied the brakes. Contos was ejected from the motorcycle.

Contos was transported to Upstate University Hospital in Syracuse, where he died.

State Trooper Jack Keller told a Syracuse TV station that a helmet could have saved Contos’ life. “The medical expert we discussed the case with who pronounced him deceased stated that he would’ve no doubt survived the accident had he been wearing a helmet.”

New York is one of 20 states that require motorcyclists to wear helmets.

The protest ride was organized by the Onondaga Chapter of American Bikers Aimed Toward Education, or ABATE, a group that lobbies for motorcycle awareness and encourages the voluntary use of helmets but opposes mandatory helmet laws.

Thomas Alton, the statewide president of ABATE, told The Associated Press that Contos, not a member of ABATE, had 30 years’ experience as a motorcyclist.

Participants in the 30-mile ride from Syracuse to Lake Como near Cortland were given the choice of whether they wore helmets, Alton told the AP. There were about 550 riders participating.

ABATE lobbies for many issues, Alton said. “Awareness is our first issue. A large percentage of motorcyclists killed on the highway have been because a car turned left in front of them,” Alton told the AP.

This story is receiving national attention due to the irony of it all.  It has become a punchline.  What is getting lost in this story is that Philip Contos died for a cause he believed in.  He knew the risk he was taking when he got on his bike without a helmet.  He knew that statistically speaking, he was more likely to die or be seriously injured than a helmeted rider if he was in an accident.  I can’t know the personal reasons why Mr. Contos chose to ride without a helmet that day – maybe it was for the unencumbered sense of freedom – maybe it was to protest the government’s intrusion into an area he viewed as a matter of his personal choice – maybe he took his helmet off that day to protest for the rights of others to choose whether they want to wear a helmet.

No matter the reason, the fact remains that Phillip Contos died protesting a law he felt was wrong.  Whether you agree or disagree with him, Mr. Contos doesn’t deserve to made into a national punchline.

Jim Hedlund of the Governors Highway Safety Association told the AP that a helmet that meets federal standards reduces the wearer’s chances of being killed in an accident by more than 40 percent. That number, again, is 40 percent.  I can’t speak to statistics, but what I can tell you from personal experience is that a motorcycle helmet can absorb an awful lot of damage that would otherwise be sustained by the riders head.  You wouldn’t believe some of the cracked, scuffed, road rash covered helmets I have seen which left the head inside of them injury free.

There is an old joke somewhere about helmets only being good for protecting the face for a biker’s funeral.  From my personal experience as a NY and PA motorcycle accident attorney, this is not the case.  In my experience, well over 50% of non-fatal motorcycle accidents involve the rider’s head making contact with the pavement.  I know that I would rather have that impact absorbed by my helmet than my skull.

I asked a couple attorney friends of mine what they thought of helmet laws.  The one who doesn’t ride said this:

The helmet law infringes on the freedom of the motorcyclist to enjoy the ride, the sun, the wind, etc., without being unwillingly encased in a hard plastic protective shell. What the Tea Partiers derogate as “the nanny state.”  It also infringes on their freedom to get their brains splattered, and then be in a hospital, often forever, usually at the taxpayers’ enormous expense. So it is a classic contest between an individual’s personal freedom vs. a broader societal interest, that are in opposition.  Not dissimilar to the right of smokers to enjoy inflict their carcinogens on all the non-smokers around them.

The attorney friend who rides said this:

As I always say: Anyone who rides a motorcycle without a (real) helmet, has no brains to protect anyway.

Personally, I would never consider getting on my bike without a helmet.  But I recognize that some people feel differently.  Mr. Contos was one of those people.  Rather than making fun of his death, let’s show Mr. Contos and the cause he died for the respect they deserve.