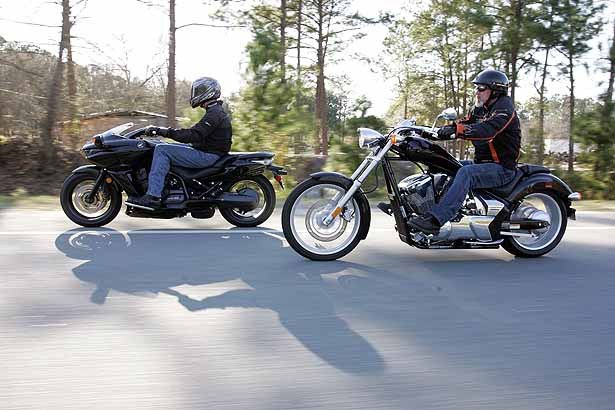 New motorcyclists face a higher risk of injury and damage to their bikes, but inattentive drivers are the greatest danger we face.

A recent Associated Press story, timed for the spring start of motorcycle season in the Northeast, points out that the most dangerous time for motorcyclists is their first year – especially the first month, according to safety studies cited by the AP.

Another study cited by the AP shows that fast-track licensing courses that boast lowering crash risks may actually raise that risk.

I agree that the first riding season is when a new rider is most likely to lay his or her bike down, particularly when engaged in low-speed maneuvers. At higher speeds, a motorcycle is much more stable and forgiving, but at low speeds the bike can be tippy.

It takes a while for new riders to get used to their four limbs doing four different things. When accidents occur at low speeds, the things most commonly injured are the riders’ pride and the motorcycle.

During and after that first riding season, the most serious risk that bikers face is inattentive drivers. These drivers change lanes and turn in front of bikers as if we are invisible, and the result is frequently very serious injury or death. Why did this story ignore the biggest danger facing all motorcyclists?

Matthew Moore of the Highway Loss Data Institute told the AP that riders face four times more risks in their first 30 days than they face in their entire second year. “It’s most likely inexperience. Operating a motorcycle is a fairly complex task.”

For example, Moore pointed out correctly to the AP that pulling out on a hill requires at least a half-dozen actions: balancing on one foot, braking to keep the bike from rolling back, shifting gear, feathering the throttle, watching for traffic and releasing the clutch.

According to the story, an institute study showed 22 percent of nearly 57,000 collision claims from 2003 to 2007 occurred in the first 30 days after an insurance policy took effect. The claim rate dropped one-third in the second month and almost two-thirds after six months.

An institute analysis of state-required training programs for riders under 21 in California, Florida, Idaho and Oregon found graduates’ collision claim frequency was 10 percent higher compared with 28 states without those requirements, according to the story. One possible explanation: riders completing a course are often fully licensed, which may shorten the learning period riding under a preliminary permit, Moore told the AP.

In New York State, passing a written test results in a one-year permit, which allows riding with a licensed motorcyclist. Learners then must pass a road test or successfully complete the two- to three-day course of classroom and hands-on instruction.

The nonprofit Motorcycle Safety Foundation’s basic rider course, offered in 48 states, has trained more than 6 million riders, including about 400,000 last year. It costs $275 in New York. One survey indicates that 45 percent of U.S. riders have taken the course.

I am one of those riders.  I found the course to be invaluable, and would strongly recommend everyone take it.  Even if you have experience on two wheels as many of us do from days spent on dirt bikes, riding on the road is different.  Statistics don’t always tell the whole story, and I find it hard to believe that those who take and MSF class are more liekly to be involved in a collision.

U.S. motorcycle deaths peaked in 2008 at 5,312, having doubled in a decade, according to federal data. The increase was attributed to more ridership especially among baby boomers who ride for fun. Fatalities dropped to 4,469 a year later as sales dropped nearly 50 percent in the recession.

I hope the next Associated Press story I read about motorcycling addresses the dangers of inattentive drivers! Given the reach of AP stories, a story like that would remind readers everywhere to watch for motorcyclists – and it might even save lives!