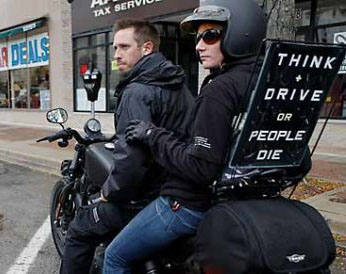 We’ve all seen it – the drivers who are talking on cellphones, fixing their hair, eating, drinking, applying makeup – doing whatever they can to combine their driving time with some other task.

Distracted driving is not only dangerous – it’s deliberate. Does anyone really want to have on their conscience the fact that they harmed someone else because they were trying to finish their grooming in the car?

Last year in Chicago, a driver who was painting her fingernails while driving, struck and killed a motorcyclist in a Chicago suburb.

The American Motorcyclist Association recently posted an article, “Fingernail-painting driver who crashed into motorcyclist sentenced to 18 months” (the story is also pasted below), about the resolution of the 2009 case.

Lora Hunt, a nurse, hit biker Anita Zaffke at a stoplight. Hunt admitted to police at the scene that she had been doing her nails at the time of the accident. Hunt has been vilified on the Internet, and the accident labeled “The Nail Polish Crash.”

Last week, the sentencing was announced in the case. Hunt was charged with “reckless homicide.” She was sentenced to 18 months of nighttime jail, 240 hours of community service and 30 months on probation.

I hope it is enough to bring Anita Zaffke’s family some peace. Anita’s son, Gregg Zaffke II, began painting his own nails black in remembrance of the accident that took his mother’s life. He created an organization, the Black Nail Brigade Foundation Against Distracted Driving to spread the word about distracted driving and to lobby for laws that would impose appropriate punishment for distracted driving that harms or kills others.

A photo on Gregg’s website even shows the dashboard of Lora Hunt’s car – splattered with nail polish after the crash that killed Anita Zaffke. It’s shocking that such a trivial thing ended one life and damaged many others.

The AMA also strives to educate motorists and motorcyclists about the risks of distracted drivers. The organization has an AMA position statement about distracted driving, which includes this quote from a National Highway Traffic Safety Administration report: “Driver inattention is the leading factor in most crashes and near-crashes . . . Nearly 80 percent of crashes and 65 percent of near-crashes involved some form of driver inattention within three seconds before the event.”

Four out of five crashes are caused by driver distraction. Remember that statistic when you’re out on your motorcycle.  Assume that car is going to pull out in front of you.  Assume that car turning left will fail to yield the right of way to you.  Plan your escape and be ready to act.  Assuming the worst may save your life some day.

Fingernail-painting driver who crashed into motorcyclist sentenced to 18 months

Lora Hunt, the motorist who crashed into motorcyclist Anita Zaffke in a Chicago suburb in 2009 and killed her, has been sentenced to 18 months of nighttime-only imprisonment. Hunt ignited outrage within the motorcycling community when she admitted to police that she was painting her fingernails at the time of the accident.

During her jail sentence, Hunt, who is a nurse, will be allowed to work during the day as well as go to counseling sessions. The Morris, Ill., resident must also perform 240 hours of community service and spend 30 months on probation.

Hunt was sentenced on July 22 by Lake County (Ill.) Judge Fred Foreman after being convicted on May 6 of reckless homicide.

Zaffke, 56, of Lake Zurich, Ill., was killed on May 2, 2009 when Hunt ran into the rear of her motorcycle at a stoplight in Lake Zurich, about 40 miles north of Chicago.

After the fatal crash, Greg Zaffke II of Wauconda, Ill., the victim’s son, began painting his fingernails black as a reminder to anyone he meets of his mother’s death. He also formed the Black Nail Brigade Foundation Against Distracted Driving (www.BlackNailBrigade.org) to publicize the dangers of distracted driving, push for legislation to impose appropriate penalties for distracted drivers who seriously injure or kill others, and to boost awareness to share the road with motorcycles.

“On behalf of the AMA and its members, I want to express our sincere condolences to Ms. Zaffke’s family,” Moreland said. “Tragedy can result from distracted driving, and we hope that our efforts and those of Greg Zaffke will help avoid further tragedies.”