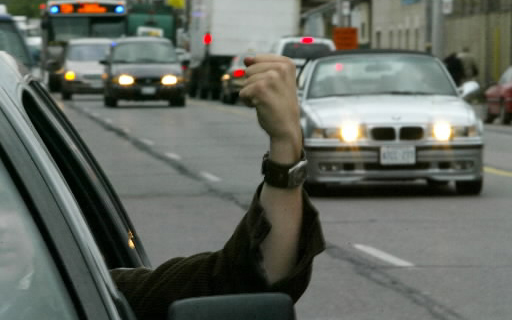 When faced with a road rage incident, just get away as quickly as possible and avoid confrontation.

Craig S. Hasman was found not guilty after almost two days of deliberations, according to the Rochester Democrat and Chronicle newspaper.

Hasman, who was riding his motorcycle with his girlfriend, was being tailgated by a van when the altercation occurred. Witnesses said a verbal altercation started when Michael Lee, a passenger in the van, pushed over the motorcycle and struck Hasman in the face.

Hasman then shot Lee in the stomach with a .45-caliber pistol he was legally carrying. Hasman’s lawyer said Hasman was justified in shooting Lee because it was in self-defense. The van’s driver testified that Hasman started the incident.

I am relieved that a jury didn’t just rule against Mr. Hasman just because he was a biker. Too many people see all motorcyclists as Hell’s Angels. We are not.  Instead of rendering a verdict based on appearances, it seems this jury spent the time to thoroughly consider the evidence and render a verdict that was fair and just

In August 2010, when this incident was in the news, I blogged about it and had important advice to all motorists. It bears repeating now:

When faced with aggressive drivers, just get away. Don’t confront, don’t argue, don’t get off your bike, just get away. You have no idea what or who you are dealing with. That’s my firm advice as a NY and PA motorcycle accident lawyer.

So, all motorists in Elmira, Corning and the Twin Tiers, when faced with a road rage threat, remember these three simple words: Just get away!

YOU NEVER KNOW WHO YOU ARE DEALING WITH. You don’t know if the person you are tailgating, or who is tailgating you, just had the worst day of their life and is out driving with a gun on the seat next to them waiting to take their anger out on someone else. It is impossible to know who or what you may be dealing with, so the best answer is to just avoid the situation altogether.

I would caution readers who may think this verdict gives them a green light to pull a gun any time they are accosted.  The rules regarding the use of a firearm in self defense are very complicated – Mr. Hasman was ultimately exonerated more than a year later, but I suspect that if you asked him, he would tell you he wished he had never pulled out his gun.

Thanks for reading, and ride safe – and smart!