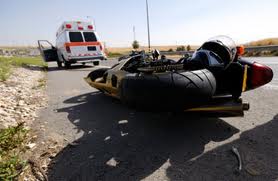 Eleven months ago Mike Frawley was just like you and me.  He was a biker out for a ride; sharing the road, obeying the traffic laws, enjoying freedom on two wheels.  Little did he know his life was about to change forever.  As Mike was cruising along on his motorcycle, someone else was about to join him on the road; but this person wouldn’t be sharing the road or obeying the traffic laws.  As Mike Frawley was cruising down the road, Debra Wylie was stumbling out of a bar and fumbling for her keys.  She managed to get the keys in the ignition and start her Jeep even though her blood alcohol was more than 1 1/2 times the legal limit at 6:00 in the afternoon.

Despite her intoxication, Debra Wylie managed to get her Jeep onto the road.  Wylie and Mike Frawley were headed in opposite direction  – in life and on the road.  Mike was a young father with everything to live for and a family who relied on him.  Debra Wylie was a 58 year old woman drunk at 6:00 in the afternoon.  Mike was headed north on College Ave, in Elmira Heights, NY.  Ms. Wylie was headed south.  As each approached the intersection with 13th Street from opposite directions, they each had a green light.  Mike intended to continue straight through the intersection, while Ms. Wylie intended to turn left across Mike’s path.  Ms. Wylie was required to yield to Mike, to turn only when it was safe to do so.  Due to her drunken state she never even saw Mike coming.  She turned in front of Mike when he was so close to the intersection that there was nothing he could do to avoid striking the Wylie vehicle.  In the blink of an eye, Debra Wylie’s selfish intoxication changed Mike’s life forever.

11 months later, Mike and Debra Wylie are still headed in opposite directions.  Mike is slowly trying to put his life back together between ongoing doctors appointments and physical therapy.  He isn’t anywhere close to 100% yet, and likely never will be, but he continues to improve.  Debra Wylie is starting a new life as well, courtesy of the NYS Department of Corrections.  She appeared in front of the Chemung County Court today, and was sentenced to 1-3 years in state prison.  If only Mike’s sentence would end so soon.

Mike is a client of mine.  He’s the nicest guy you would ever want to meet, and has a beautiful little daughter.  Its a shame that he can’t remember her early years because of the injuries he sustained.  Hopefully his body will heal to the point where he can go back to work soon, as the forced inactivity is driving him crazy.

WETM – did a story on the sentencing today – click the link or read the full story below.

Thanks for reading, and please don’t drink and drive!

In October, she plead guilty to vehicular assault and two counts of DWI.

On Monday, Wylie was sentenced in Chemung County Court to 1 to 3 years in state prison.

During the crash, 30-year-old Frawley crashed into Wylie’s Jeep head on and was thrown from his motorcycle.

As a result, he suffers brain damage and cannot perform normal everyday functions.

“I have no remembrance of my daughter growing up. I don’t remember feeding her, changing her, none of it. I don’t have memory of ever getting married” said Michael Frawley, the victim.

Frawley’s mother said even though her son could walk into the courtroom, his life will never be the same.

“(He’s a) totally different person, then he used to be. He used to be funny, a comedian” said Robin Butters, Frawley’s mother. “I don’t know, apart of you dies when something like that happens. You never get it back”.

Wylie will pay more than $95 thousand dollars in restitution fees.