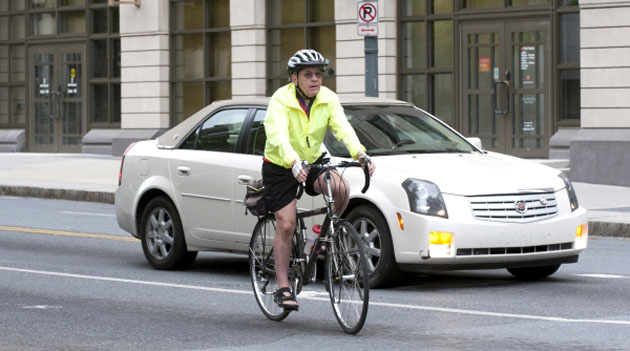 A safe bicycle passing law in New York State designed to make it safer for bicyclists and motorists to share the road is too vague and hard to enforce.

Merrill’s Law, passed by the state Legislature in June 2010, requires motorists to pass bicyclists at a safe distance to prevent accidents. The law was named in honor of Merrill Cassell of Hartsdale, a safe bicycling advocate who was struck by a passing public bus and killed in 2009. The bus driver was never charged.

A recent story in a downstate newspaper, published on the fifth anniversary of Merrill’s death, shared the sad news: bicyclists don’t feel safer and police across the state are writing few tickets for safe passing violations.

In this 2010 blog post, I said I was happy to see the law pass but I was critical of the wording, calling it too vague to enforce. I was right.

Because what constitutes a “safe distance” is not clearly defined under the current NY safe passing law, the legal distance is subject to interpretation. Frankly, I much prefer the safe passing law of at least 24 other states who list a specific, objective “safe passing” distance like 3 feet, 4 feet or more.

I prefer this objective standard because I think it is easier for prosecutors to prove an objective, concrete distance like 3 feet rather than argue about what might have been safe under the circumstances.

I have long believed the NY safe passing law is virtually worthless because of the difficulty of determining legally what constitutes a “safe distance” for a motorist to pass a bicyclist.

Unfortunately, in any case involving anything short of the cyclist actually being struck by the motorist, the motorist has a compelling argument that the passing distance “must have been safe because I didn’t hit the cyclist.”

Because of this ambiguity, many police officers have told me off the record that they won’t write tickets for violating this law unless there is an actual collision.  And at least one local DA has told me the same thing. So what good is a law that law enforcement won’t enforce?  No good.

Because of the lack of enforcement of our current law, I have spent many hours advocating for NY to adopt a 3-foot passing law. I think 3 feet is easy to enforce because that’s the length of a yardstick that hangs in virtually every elementary school classroom I have ever been in.

For sports fans, one yard is one of those hashmarks on the field every time you tune into a football game.  For a person of average height, 3 feet is their approximate arm length.

No measurement is easy or precise, but in my view, any particular measurement (i.e., 3 feet or 4 feet)  is much better than the ambiguous “safe distance.”

Here is the law under discussion:

“The  operator  of  a  vehicle overtaking, from behind, a bicycle proceeding on  the  same  side  of  a roadway  shall pass to the left of such bicycle at a safe distance until safely clear thereof.”

Would 3 feet be a safe passing distance? Or do you prefer 4 feet, or more?

Please add your comments below!