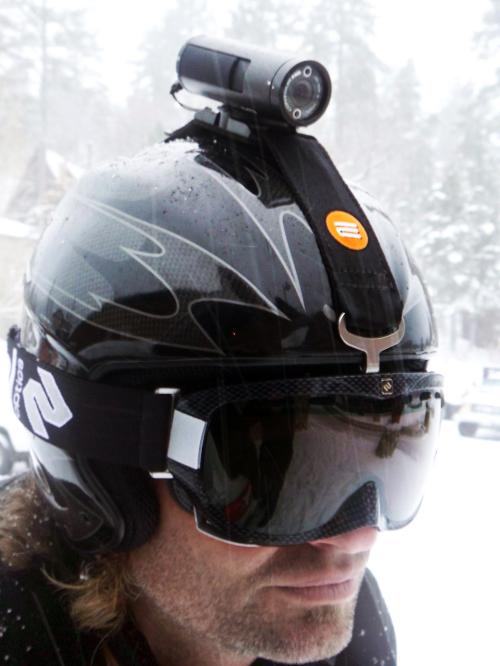 More bicyclists will soon be wearing cameras to chronicle their journeys and protect themselves in case of an accident.

Who hasn’t heard the old adage “A picture is worth a thousand words”?  Well, when it comes to bike accident cases, a picture (or even better yet, a video) can be worth MUCH more than a thousand words.  As I have written many times before, my bike accident cases often come down to a “he said, she said” argument about who was at fault with the drivers ALWAYS claiming it was the cyclists fault.

What could be better than solid, unassailable proof about what caused a collision?  A video of the collision, or even a photo of the accident scene, after a collision can make all the difference in the world if you have the misfortune to be hit while riding your bike.

Bicyclists across the country are capturing still and video images of their rides by buying cameras for their bikes or helmets.

They are great for chronicling our travels, but let’s face it — for bicyclists, they capture our side of the story when there is an accident or incident on the road.

And that’s very valuable to any bicyclist who has ever had problems with thoughtless, careless and distracted drivers and pedestrians.

A recent New York Times story looked at the growing number of bicyclists who have taken to wearing helmetcams, with an emphasis on urban commuters.

But it translates well to riders in Elmira, Corning and the Twin Tiers, too!  Those of us who commute to work locally by bike can attest that the “big city” problems are just as prevalent here!

The New York Times story opens with the tale of a Washington bike commuter who was sideswiped by a pickup truck. The bicyclist was not able to get the license plate as he went flying to the pavement, but he was wearing a helmetcam and was able to get the plate number off the video and provide it to police.

The driver was charged with Leaving the Scene of an Accident and has pleaded not guilty, according to the Times.

Another bike commuter in California was about to be confronted by an angry driver when the bike commuter pointed to his helmetcam. “I said, ‘Don’t be stupid.’ He quickly ran back to his car. I’m certain I avoided a couple of blows.”

Bicyclists told the Times that cameras can deter motorist harassment, a problem that many complain about and that cities like Los Angeles and Berkeley, Calif., have sought to combat with new laws.

“It’s a fact of life that on American roads that you get punked, cut off purposely, harassed, not once but on a regular basis,” Bob Mionske, a former Olympic cyclist and a lawyer representing bicyclists in Portland, Ore., told the Times. “If motorists start to hear about bikes having cameras, they’re going to think twice about running you off the road.”

GoPro and Contour make the most popular models, so you might want to start your shopping there. Prices start at around $200, according to the Times.

These videos have begun to play a valuable role in police investigations of a small number of hit-and-runs and other incidents around the country, local authorities say.

I expect the use of more cameras as awareness of the devices goes up and their prices come down.

It’s a worthwhile investment for bicyclists who log hundreds of miles a year.

What do you think about helmetcams? If you’re a bicyclist, will you buy one? Will it make YOU safer, too, knowing that if you break the law, that will be captured on video, too?

Thanks for reading. Please be careful out there!