Why Bicyclists Are Five Times More Likely To Die In The U.S.! 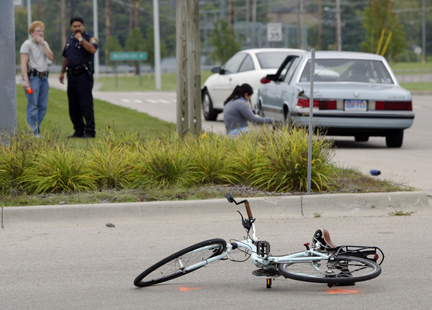 The tragic death of a bicyclist in Seattle reminds us of the dangers all riders face in America.

The Tucson Bike Lawyer posted this great article from The Economist on the tragic death of a 44-year-old bicyclist — and father of two —  in Seattle.

This is important reading for all drivers in Elmira, Corning and the Twin Tiers!

With a very few exceptions, America is no place for cyclists…..

DYING while cycling is three to five times more likely in America than in Denmark, Germany or the Netherlands.

To understand why, consider the death of Michael Wang. He was pedalling home from work in Seattle on a sunny weekday afternoon in late July when, witnesses say, a brown SUV made a left turn, crunched into Wang and sped away.

The road where the 44-year-old father of two was hit is the busiest cycling corridor in Seattle, and it has clearly marked bicycle lanes.

But the lanes are protected from motor vehicles by a line of white paint — a largely metaphorical barrier that many drivers ignore and police do not vigorously enforce. A few feet from the cycling lane traffic moves at speeds of between 30 miles per hour, the speed limit for arterials in Seattle, and 40 miles per hour, the speed at which many cars actually travel. This kind of speed kills.

A pedestrian hit by a car moving at 30 mph has a 45 percent chance of dying; at 40 mph, the chance of death is 85 percent, according to Britain’s Department of Transport.

Had Mr Wang been commuting on a busy bike route in Amsterdam, Copenhagen or Berlin, his unprotected exposure to instruments of death — namely, any vehicle moving at 20 mph or more — would be nearly nil. These cities have knitted together networks for everyday travel by bike. To start with, motor vehicles allowed near cyclists are subject to “traffic calming.” They must slow down to about 19 mph, a speed that, in case of collision, kills fewer than 5 percent. Police strictly enforce these speed limits with hefty fines. Repeat offenders lose their licences.

Calmer traffic is just the beginning. In much of northern Europe, cyclists commute on lanes that are protected from cars by concrete buffers, rows of trees or parked cars.

At busy crossroads, bicycle-activated traffic lights let cyclists cross first. Traffic laws discriminate in favor of people on bikes. A few American cities have taken European-style steps to make streets safer for cycling, most notably Portland, Ore., which has used most of the above ideas. The result: more bikes and fewer deaths.

Nearly 6 percent of commuters bike to work in Portland, the highest proportion in America. But in five out of the past 10 years, there have been no cycling deaths there.

In the nearby Seattle area, where cycling is popular but traffic calming is not, three cyclists have been killed in the past few weeks.

The most interesting take-away for me was the risk of death based upon vehicle speed:

Speed truly kills! And that’s another GREAT reason why motorists should slow down whenever they see a cyclist!

Thanks for reading and remember to ride safely!