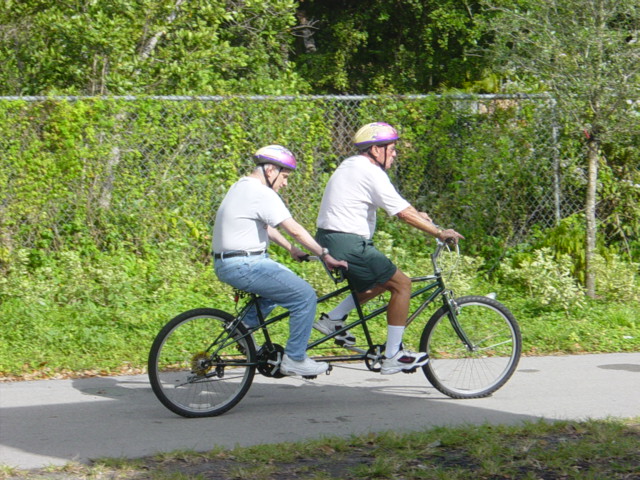 A Parkinson’s disease researcher made a remarkable discovery after a ride on a tandem bicycle with a patient.

One of my Oregon bicycling buddies forwarded me a link to this interesting article in The New York Times about preliminary research that suggests that tandem bicycle riding could be one of the exercises that minimizes the devastating symptoms of Parkinson’s disease.

Dr. Jay L. Alberts, a Parkinson’s disease researcher at Emory University in Atlanta, participated in a bike tour across Iowa with a patient to raise awareness about the disease, according to the Times.

After the first day of riding, though, something unexpected happened. One of the patient’s symptoms, handwriting that could become unreadable, improved dramatically.

After that, Dr. Alberts started a series of experiments with patients on tandem bicycles. The early results focus on whether exercise can help combat the disease and also — more importantly — whether intense, forced workouts affect brains differently than slower, easier workouts.

Studies have shown that forced exercise is typically more beneficial for the brains of animals. Continuing research is analyzing how forced exercise, rather than voluntary exercise, may have a beneficial impact on the physical and mental health of people.

After eight weeks of hourlong sessions of forced riding, most of the patients in Dr. Alberts’ study showed significant lessening of tremors and better body control, improvements that continued for up to four weeks after they stopped riding, according to the Times.

The tool of choice for these experiments is a tandem bicycle, which is also my tool of choice for a great deal of my own cycling.  My patient (and strong!) wife can readily attest to the fact that our tandem riding often turns into forced exercise when one of us prefers to ride easier or shorter while the other prefers to go longer or harder — now I can tell her that this forced exercise is GOOD for us!  🙂