My heart goes out to the parents of 7-year-old Haydin Antonio Riggins of Troy, who was struck and killed last week while riding in a bicycle trailer with his sister.  This sad story hits home for many cyclists like myself who remember fondly the days of riding their bikes with their kids in either a cycling trailer or child seat– my three kids each spent many hours in our tow-behind bike trailer and I can only imagine the horror and grief felt by this boy’s father and family…… 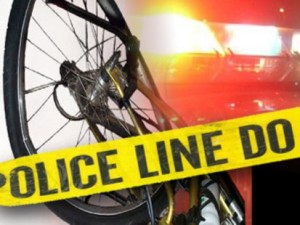 Based upon the news accounts, it sounds like the pickup truck driver who struck the bicycle and trailer failed to yield the right of way to the bicycle that was already within the intersection.

As we have discussed before on this blog, the driver of a vehicle entering an intersection has the legal obligation to yield the right of way to any vehicle (including a bicycle) that is already within that intersection.

In other words, the driver of the pickup truck that struck the bicycle ridden by Haydin’s father Marcell Riggins had a legal duty to yield the right of way to the Riggins bicycle and the driver’s failure to do so is a violation of the law.

According to news reports, a truck driven by David Edwards of Mansfield struck the bicycle shortly after 6 p.m. on Sept. 3 at Elmira Street and Porter Road in Troy, Bradford County.

Police said the impact of the crash threw the father clear of the bicycle but the bicycle trailer with Haydin and his 6-year-old sister, Skylar, was dragged a distance before the pickup truck finally came to a stop.

Haydin was pronounced dead at the scene. Marcell and Skylar were treated at Troy Community Hospital for injuries that were not considered life-threatening, police said.

Edwards and a passenger, Ryan Johnson, also of Mansfield, were not injured.

Per newspaper accounts, the police investigation continues but one has to wonder why at least a Failure to Yield ticket has not been issued to the pickup truck driver.  Hopefully, Haydin’s family is keeping in close contact with the police and the District Attorney’s office to make sure appropriate charges are filed in this tragic collision.

My thoughts and prayers go out to the entire Riggins family……