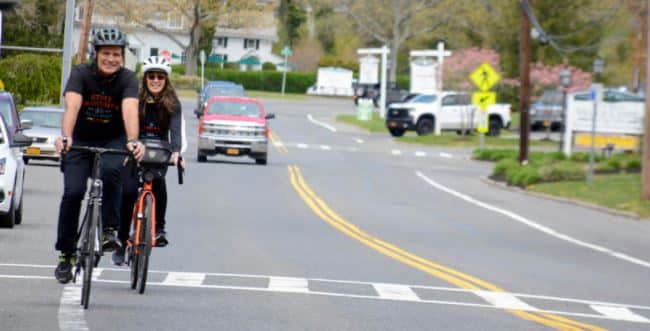 Marty and Elyse Buckman, owners of Stony Brookside Bed & Bike Inn, a bed and breakfast that offers bicycle rentals and nearby tours, said they want drivers to share the road with cyclists. (WSHU Radio)

Suffolk County, on New York’s Long Island, has becomes the first county in NY to pass a law requiring motorists to give at least 3 feet of space when passing a bicyclist. The measure was signed into law on April 5, and I hope it spurs other counties – including our counties in the Southern Tier – to adopt similar laws to protect vulnerable cyclists.

For at least 5 years, I have been advocating with the NY Bicycling Coalition (www.nybc.net) for a statewide 3-foot law but so far that effort has been unsuccessful. Thirty-three states have 3-foot passing laws and Pennsylvania and a few other states have adopted 4-feet laws. 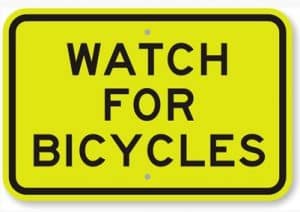 In Suffolk County, drivers who break the law could face fines up to $225 for a first offense, $325 for a second offense and $425 for any subsequent offense.

On streets and roads with marked bike lanes, the minimum distance requirement does not apply. The new law trumps the state’s poorly written motor vehicle law that requires drivers to maintain a “safe distance” when passing bicyclists.

“We hope to educate drivers that passing too closely is a dangerous and potentially deadly threat,” said Suffolk County Legislator Kara Hahn, who led the drive to pass the bill after her husband was hit by a car while cycling.

My good friend and fellow bike crash lawyer Dan Flanzig, who was instrumental in advocating for the Suffolk 3′ law, said:  “By amending this law, changing words ‘safe passing’ to a defined distance of three feet, we’re now going to have an absolute rule of law that gives police officers the ability to enforce that law”.

Flanzig said a similar three-foot distance regulation exists in 33 other states. “Our hope is that it’s going to continue as a wave across the state, until eventually Albany wakes up,” he said.

The Suffolk County Police Department supports the new law and said in a statement that officers will be on high alert in areas frequented by bicyclists to ensure motorists are complying with the new law.

The National Highway Traffic Safety Administration has a great website on bicycle safety for cyclists AND drivers. The statistics are staggering – more than 800 cyclists were killed in traffic crashes across the country in 2018 and 2019. Many of those who died were hit from behind or on the side.

Establishing a safe passing distance statewide is a great first step in making our roads safer for cyclists. Now that one county has made the responsible move, and cyclists are back on our roads, Albany should make it the law statewide!