It is a sad day when a county sheriff totally misstates NY law in reaching the wrong conclusion about a cyclist’s death.

Rock ‘n’ roll singer Ed Lakata was riding his bicycle last month from his home in Johnstown, NY, in Fulton County, to a camp on Caroga Lake when he was rear-ended by a pickup truck driven by John Damphier, 48, of Johnstown. 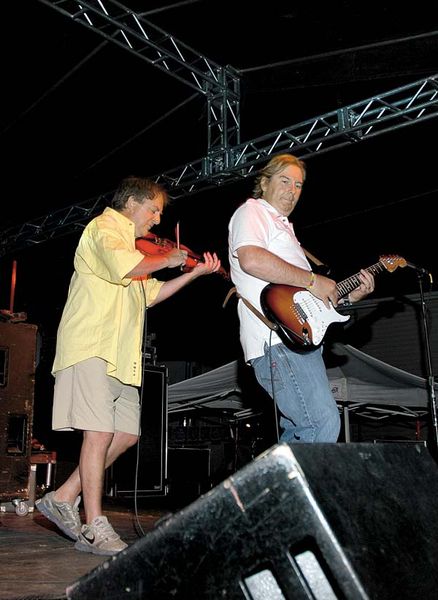 Musician and singer Ed Lakata of Fulton County, left, was killed while cycling recently. (Photo from the Gloversville Leader-Herald.)

Lakata was killed instantly. He was 55.

Damphier was driving north on Route 29A at the same time Lakata was riding north up a steep incline. According to Damphier, Lakata was struggling on the hill and veered into the side of Damphier’s truck.

You can read stories about the accident here and here.

Fulton County Sheriff Thomas Lorey told the Schenectady Daily Gazette: “It was an accident in the truest sense of the word.”

He based that conclusion on this line of thinking in the Daily Gazette:

Lorey said the solid white line between the shoulder and driving lane is used to determine fault in such circumstances. He said if Damphier had crossed that line before the crash, he would be facing charges. Similarly, if Lakata crossed into the driving lane, he would be to blame.

“We investigated the crash,” he said. “The accident happened very near the white line, but we couldn’t gather proof that anyone crossed over.”

In the absence of such proof, it was ruled an accident, especially since Damphier was not exceeding the 55 mph speed limit.

The sheriff is dead wrong on his analysis of fault in this scenario.

The Sheriff mistakenly suggests that there is a “white line” analysis of fault in NY cycling cases saying that if the cyclist was to the right of the white line he is OK but if he is to the left of the fog line he would be at fault in causing the collision.

The Sheriff’s analysis is absolutely incorrect on two scores:

Furthermore, NY law is clear that any motorist approaching a cyclist from behind may only pass that cyclist when there is a safe distance to pass that cyclist.  Vehicle and Traffic Law Sec. 1122-a requires  “[t]he  operator  of  a  vehicle overtaking, from behind, a bicycle proceeding on  the  same  side  of  a roadway  shall pass to the left of such bicycle at a safe distance until safely clear thereof.”

In other words, a motorist is REQUIRED to slow or even stop behind a cyclist if there is not a reasonably safe distance to pass that cyclist.  A motorist is NOT permitted to “squeeze” or “brush back” a bicyclist just because the bicyclist might be slowing them down.

As a member of the Board of Directors of the New York Bicycling Coalition, I am urging NYBC to advocate for an amended passing law in NY.

Our thoughts and prayers are with Mr. Lakata’s family.