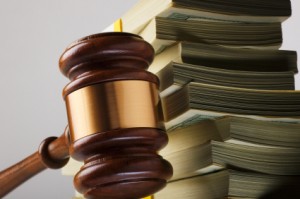 I just read of a great jury verdict on behalf of an injured bicyclist. I am very happy for this bike accident victim because I know all too well the HUGE medical expenses and other financial damage suffered by a badly injured cyclist.

I was also pleased to see that the jury rejected the defense argument that the bicyclist was at fault in causing the collision. I am so sick and tired of the lame “blame the victim” defense that it is gratifying to see juries reject this nonsense.  In this case, the defendant ran a red light AND was speeding and he wants to blame the cyclist?  Yeeesh!

Here’s the full story on the recent verdict:

A New York jury has awarded $6 million to a restaurant deliveryman, who was run down on his bike by a rental car.

The personal injury lawsuit was filed in Kings County Brooklyn Supreme Court by Jing Xue Jiang, 26, who was struck on June 4, 2005. The vehicle that struck Jiang was being driven by Jamaal Freeman and was rented from Dollar Rent a Car and Rental Car Finance Corp. The bicycle accident lawsuit named all three as defendants.

According to the complaint, Freeman ran a red light at the intersection of Halsey Street and Lewis Avenue and Brooklyn, striking Jiang while he was on his bicycle. The lawsuit alleged that Freeman was speeding at the time.

Jiang suffered multiple fractures to his vertebrae, left leg, right forearm and also suffered a concussion and subarachnoid hemorrhage. He was hospitalized for 14 days, underwent four weeks of physical therapy and was out of work for six months as a result of his injuries. He allegedly suffers residual impairment of his cognitive functions due to the swelling of the brain caused by the accident.

Defense attorneys admitted that Freeman was negligent, but also argued that Jiang could have avoided the accident and was thus partially responsible.

The jury rejected that argument and found the defendants fully liable for Jiang’s injuries. The jury awarded Jiang $6 million for past, present and future pain and suffering, and $125,000 for future medical expenses.