Long Island County Legislator’s Shocking Letter To Teenager: No One Should Ride a Bicycle! 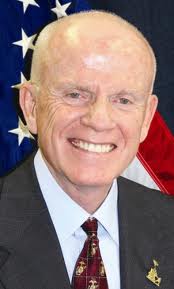 A county legislator on Long Island, responding to a request from a 17-year-old resident to create bicycle lanes after his mother was injured by a motorist, recently offered this jaw-dropping opinion: “… My personal feeling is that no one who lives in our hamlet or for that matter in Suffolk County should ever ride a bicycle or motorcycle.”

Thomas Barraga was responding to a letter from Matthew Cutrone of West Islip, NY, who said his mother was struck by a work van on Sept. 19. The driver was making a left turn and said he never saw his mother until he struck her, Matthew said. Fortunately, his mother was wearing a helmet, but she still broke her scapula and had head and neck injuries, he said.

Barraga’s letter has a few other shocking statements:

“Ninety percent of (bicyclists) are eventually hit by an automobile, many like your mother (suffer) serious injuries.”

“Suffolk County is a suburban automobile community — drivers expect to see other drivers on the road, not bicyclists and motorcyclists.”

Read a news story about the letters here.

When asked by a TV news reporter where he got the 90 percent from, Barraga said: “It’s predicated on my constituents who have contacted me over maybe a 30, 35-year period.”

It is a VERY sad day when a county legislator who is elected by the people to represent the people says “no one in our [community] should ever ride a bicycle.” Rather than working to make streets safer to cyclists, his enlightened approach is to suggest that no one should ever ride a bicycle. Great plan. Rather than working to fix something and to encourage an activity that is healthy and environmentally friendly, we should just give up and make sure no one ever ventures outside their house to walk, or run, or ride

Sadly, I feel that he made the mistake of saying out loud what many politicians privately believe. I fear that many legislators do not understand the importance of allocating some of the massive road budget to making roads safer for cyclists, walkers and runners. Thankfully, there are other legislators who DO get it and who understand that the future is improved by encouraging safe recreational use of our roads.

Unlike this legislator, I am not anywhere near ready to give up advocating on behalf of others who want to safely share the roads with car. … To that end, I strongly encourage my readers who care about cycling in NY to join the New York Bicycle Coalition. NYBC is works hard every day to make sure that we have a place to ride our bikes tomorrow.