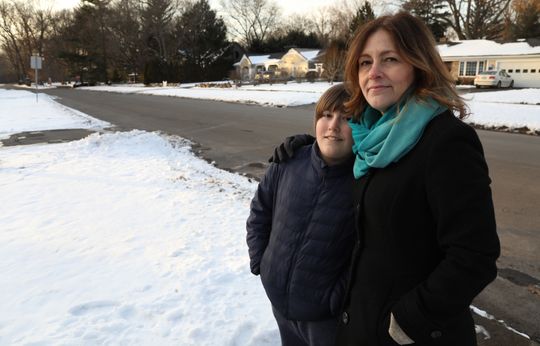 Julian Moore and his mother, Jenny Moore, near the scene of Julian’s bike collision in September. (Photo by Rochester Democrat & Chronicle newspaper)

Sometimes, a 10-year-old boy can be more responsible than a 66-year-old man.

The boy, 10-year-old Julian Moore, was riding his bike in his neighborhood on Sept. 7 when he was struck by a Range Rover being driven by 66-year-old Doug Lamb of Canandaigua,  Lamb had left nearby Oak Hill Country Club after a round of golf and was driving a borrowed Range Rover. 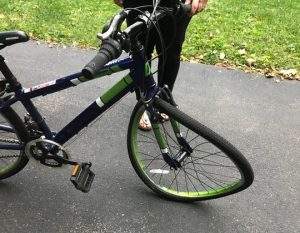 Although Lamb stopped after Julian crashed to the pavement, he left before police arrived. He didn’t identify himself to anyone at the scene, not Julian or his mother, Jenny Moore, who was called to the scene, or paramedics or witnesses. Police said he also never reported the crash to the authorities.

Julian suffered only scrapes and bruises and was later diagnosed with a concussion, his mother said.

It took investigators two weeks to track down Lamb at his lakefront home and charge him with Leaving the Scene of an Accident Causing Personal Injury, a misdemeanor.

Lamb told police he checked on Julian, waited for 30 minutes at the scene, and left after Julian’s mother declined treatment for Julian. He told investigators he didn’t think he was needed anymore.

Police reports, however, provided a different timeline. The ambulance was called at 4:54 p.m., arrived at 5:02, and police arrived at 5:12 – and Lamb was already gone when police arrived. That’s way less than the 30 minutes he claims he waited at the scene.  Regardless, under NY law, a driver involved in a personal injury crash is prohibited from leaving the scene until the police arrival no matter how long it takes for the police to arrive.

A plea deal was struck in Pittsford Town Court on Dec. 6. Prosecutors wanted Lamb to perform community service and write a letter of apology to Julian, and Lamb wanted the charge dismissed.

Town Justice John Bernacki rejected community service, citing Lamb’s age and physical condition – despite the fact that Lamb was playing golf prior to the crash.

Judge Bernacki agreed to dismiss the charge if Lamb wrote an apology to Julian, but it was Lamb’s “apology” letter that hurt Julian more than the collision with the Range Rover.

I’m very sorry that you rode into the side of the car I was driving on Friday, September 7th. More importantly, I am glad you didn’t need to be treated by the attending ambulance on the day of the incident. Wishing you a safe and happy holiday season. Sincerely, Doug Lamb.

Julian’s response? “I was angry, really angry, actually. I was really upset with it.”

Julian provided the reporter with his recollection of the “incident”: “He accused me of riding into the side of his car, which didn’t really happen. He came up from behind me.”

The Lamb case was “adjourned in contemplation of dismissal” (ACD) on the condition that Lamb write an apology letter. So the question now for the town justice is: Was the non-apology letter enough to dismiss the charge?

The newspaper columnist who wrote the story said what Lamb wrote “was an insult to the court. The court deserves better, and so does Julian.”  I wholeheartedly agree.

The court has six months to reconsider the dismissal.  A hearing is scheduled this week in town court to discuss the case.

Will justice finally be served?  Let’s hope so……