For Your Safety, Bike Like You Are Driving A Car, Says NY Bike Accident Lawyer 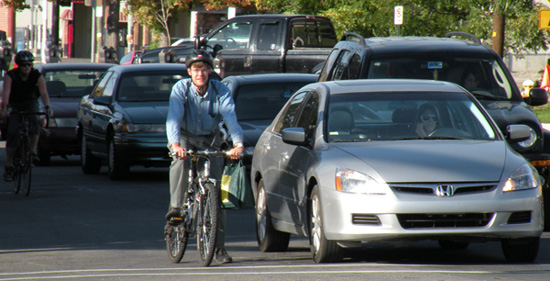 Great advice from an Ithaca bicyclist: "Don't risk your safety for a driver's convenience."

There was an excellent discussion on our local bicycle listserv (pasted below with permission of the authors) that very logically explained what I have always advocated — that riding assertively and visibly as if you were a car is safer than trying to timidly hug the curb.

As Ithaca cyclist Andy Goodell concluded: “Don’t risk your safety for a driver’s convenience.” We have a right to the roads, and it’s simply safer to take the lane and ride as if you are driving a car in most situations downtown.

Please read the discussion and then share your comments as to whether you agree with this riding style or share with us any riding practices you feel contribute to greater safety.

Andy is writing about bicycling on Ithaca city streets, but his descriptions and accounts will easily translate to the streets in Elmira, Corning and anywhere else in the Twin Tiers for bicyclists.

Our good friend from Ithaca, Andy Goodell, had this to say:

When I moved to Ithaca four years ago, I had some similar interactions and wondered why the heck people in cars drive so poorly when bicycles are near. It took me a few months to figure it out. It became rather clear to me over time that within the city, the more I ride my bike as if I’m driving a car, the fewer issues I had. I have ridden these roads and know the turns …, and when I imagine someone trying to ride next to a curb on a bridge, or splitting lanes expecting to go straight on Buffalo Street, or otherwise trying to avoid traffic on roads like these rather than being part of it, I can remember why I had those same difficulties once.

The simple answer is to act as any driver does, and use the lane. Cyclists have the right to use the full lane when sufficient space to share side by side (14 feet) is not available. I cannot think of a lane in Ithaca that is wide enough for that, so that means that I typically ride prominently in the lanes where I am visible, can ride in a predictable path, and can avoid any potholes or debris, rather than stay next to the curb. To clarify, when there is a clear and safe shoulder, I do use that space, but for the majority of city roads that is not available.

For beginners, that can go against their sense of  “I must stay out of the way of drivers at all costs” that I once had as well, but I can assure you that I now have many fewer poor interactions with drivers than when I first started cycling.

The trouble with trying to stay to the side is that it entices drivers to pass, even if it’s not safe. For example, on a bridge, if there are cars coming the opposite direction, I’m likely to move into the middle of my lane so that cars approaching me from behind don’t try to pass and cross the yellow lines at an unsafe time.

And about 99.9 percent of the time that works — the car behind me slows down for half a second, the car ahead passes by, I move back to two to three feet from the curb to allow myself a safe amount of space to avoid water grates or debris or whatnot, and the car behind me safely passes and gets to the red light maybe two seconds later than if they gunned it to pass me.

My office recently moved downtown, and I commute east along most of Buffalo Street each morning. I see other cyclists weaving around the parked cars on that road, and cars passing them rather unpredictably, seemingly unsure of if the cyclist is continuing straight or turning.

Unless there is a section of about 10 empty parking spaces or more, I ride in the middle of the lane on Buffalo Street every day now because I’ve found that interactions are simply more positive when I do that.

Considering it’s a densely populated area with cars parked along both sides of the street, a 15 mph school zone for a block or two, pedestrians crossing at every block, frequent red lights, and traffic turning at every raised intersection, it just isn’t any faster for someone driving to pass me. A few try, and we always end up at the same red light just a few seconds apart. This only helps justify why I take the lane most of the time.

There is simply no reason that I should give up my safety for someone driving a car to reach the next red light a few seconds faster. They can try, and they can grumble about me “in their way,” but I’m not going to ride along car doors that can open at any second, or weaving around parked cars unpredictably, or hug the curb only to get the “right hook” when someone tries to turn right and cut me off.

Similarly with Green or Seneca streets in downtown Ithaca, which have two lanes in each direction, I feel no need to ride along the side next to parked cars as I see many other cyclists doing. When I used to ride that way, people passed me giving very little space trying to stay within the lane. I was cut off by drivers more frequently when they made right turns and incorrectly assuming that I was out of their way on the side.

I was also stopped suddenly as cars from the side streets turning onto Green or Seneca didn’t see me because I was along the side and not prominently in the lane where they are looking for traffic. With two lanes present, it is just more predictable and safer to ride in the middle of the right lane. Even a bike lane here would be of no use unless the parking along the side was also removed, as riding 10 to 20 mph alongside cars is asking for the “door prize.”

Since these roads have fewer stops, traffic can get up to 30 mph, but I’m never impeding traffic since they can pass me on the left lane at any time. I wish more cyclists would take the lane, and maybe this rant will help a few more to understand why many people do take the lane, as I’ve found it significantly safer, easier, and more convenient.

Don’t risk your safety for a driver’s convenience. We have a right to the roads, and it’s simply safer to take the lane and ride as if you are driving a car in most situations downtown. I’d be more than happy to go for a ride to demonstrate this to anyone that doesn’t think that is so.

And then my fellow lawyer/cyclist/friend Bill Lodico chimed in:

Thanks for taking the time and trouble to write this.

Your method is exactly the right method for navigating motor traffic in a place like Ithaca (or Elmira, for that matter).

Riding a bicycle in traffic requires that you grab your spot in the traffic and make yourself obvious when you’re doing it. Even though you are not motor traffic, and you have to respect the ways in which you are different from motor traffic, if you want to move with the flow of motor traffic, you have got to put yourself where motorists are going to be looking for other traffic and used to making room for it, i.e., where other motorists are. And you’ve got to move as much like a motorist as you can.

With all the difficulty motorists have watching out for other motor traffic, you can’t reasonably expect them to be watching out for bicyclists doing their best to disappear in the parking lane (or scrunching themselves into the typical minimalist bike lane).

It’s going to remain an unfortunate fact that city streets, even in a small city like Ithaca, are not a friendly place for cyclists who don’t understand these principles or can’t accommodate them.

Thanks for reading both letters. Please share your comments below!