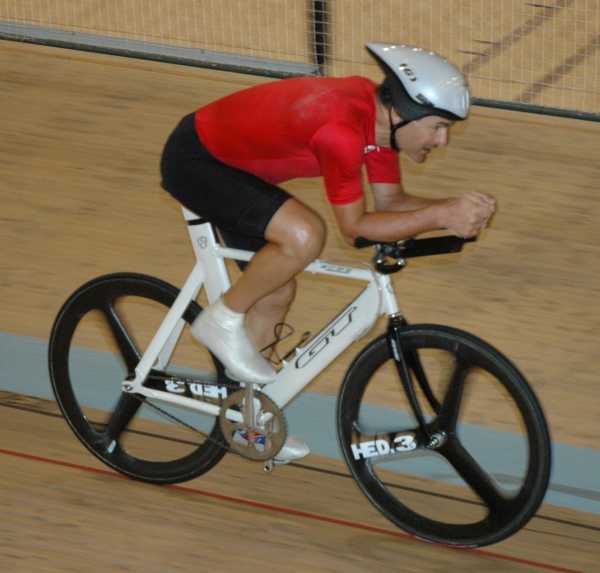 Even a world record-setting cyclist isn’t immune from careless drivers … even when his bike is lit up by not one, not two, but three FLASHING lights!

This really brings home the fact that cyclists, even those who are VERY experienced and VERY well-equipped with safety equipment, are vulnerable to careless drivers. That’s why I spend so much time trying to teach motorists to be alert for cyclists and to give cyclists plenty of space when passing.

A little bit of caution and courtesy goes a long way.

As the saying goes, “If you fall off the horse, get back on it.” Or perhaps, “Where there’s a will, there’s a way.”

In legendary ultra cyclist Michael Secrest’s case, he had to get back on his 1996 GT track bike on nine different occasions, over the span of several years, before he finally broke the 100-mile indoor track cycling record. He did this at age 58! Bravo, Michael! Here’s a write-up about this incredible, multiple world record-breaking achievement from RoadBikeRider.com:

After a clean drug test following the ride, Secrest’s record was officially certified by the Ultra Marathon Cycling Association (UMCA). His mark bested the previous record of 3:47:26 set in 1994 by Rod Evans.

As if Secrest’s time weren’t remarkable enough, he wrote us to share a couple of other amazing facts about this astounding record:

Well, fellow roadies, if you can’t find inspiration in a 58-year-old, drug-free cyclist setting an overall world record on a 15-year-old frame – you might not have a pulse!

Two more notes about Michael: He’s also the author of “The Guy on the Bike,” an autobiographical eBook that reveals details of his unmatched cycling successes and turns them into inspirational life lessons for cyclists and non-cyclists alike. He’s certainly got a new chapter to add to his book.

Finally, while he’s the rarest of cyclists in terms of his ability, he’s all too normal in terms of his facing danger every time he rides on the road. He concluded his message with a cautionary tale for all roadies:

“I forgot to mention that just four days after setting the 100-mile indoor WR, I was hit by a car making a left turn into me while I was riding through an intersection. It was early evening and I had two rear flashers and my front strobe fully functioning. The accident left me with a fractured collarbone and two fractured posterior ribs. I’m very lucky, as it could easily have been fatal. I expect a full recovery.”